The National War Memorial is a monument constructed by the Government of India to honour its armed forces. The monument lies in close vicinity of India Gate and Amar Jawan Jyoti. It commemorates the soldiers who participated and made the supreme sacrifice in Peace Keeping Missions and Counter Insurgency Operations. It was inaugurated on 25th February 2019 by PM Narendra Modi. 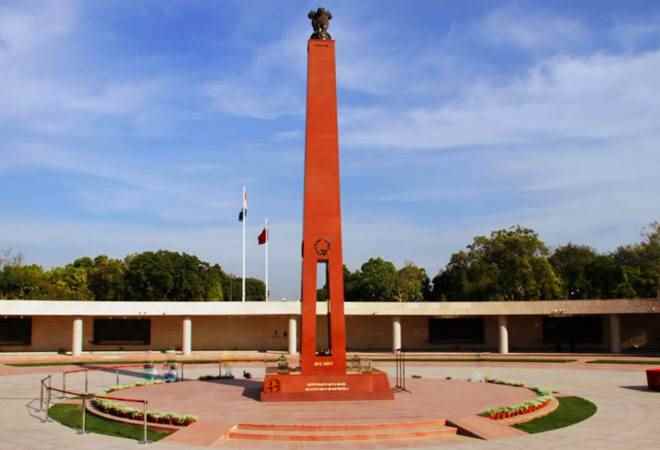 The layout of the Memorial comprises four concentric circles, Amar Chakra Circle of Immortality, the Veerta Chakra Circle of Bravery, the Tyag Chakra Circle of Sacrifice, and the Rakshak Chakra or Circle of Protection. The complex includes a central obelisk, an eternal flame and six bronze murals depicting famous battles fought by Indian Army, Air Force, and Navy.

Busts of the 21 awardees of Param Veer Chakra have been installed at Param Yoddha Sthal. The memorial will help strengthen the sense of belonging, high moral values, sacrifice and national pride in the citizens. It stands testimony to the sacrifices made by the soldiers during various conflicts, United Nations Operations, Humanitarian Assistance, and Disaster Response operations since Independence. The Memorial complex is in harmony with the existing layout and symmetry of the majestic Rajpath and Central Vista.

National War Memorial is located behind the India Gate canopy and across the National Stadium.

November to March: 9 am to 6:30 pm
April to October: 9 am to 7:30 pm
Note: The entry to the National War Memorial is restricted on certain days/timings.