The National Children’s Museum or Bal Bhavan in Delhi is designed specifically for children to enlighten them on the rich tradition of our country through its display of toys, artifacts, stone carvings, currencies, bronze objects and lots more. The museum makes children aware of the past and enables them to analyze and understand the greatness of the nation.

Such initiatives educate children on the cultural values of the country and serves as a platform to express their talents.

As the name indicates, this gallery provides a glimpse of ‘Our India’- Indian culture, tradition, religions and customs, art forms and the advancement in the field of technology achieved in India. Audio visuals projected here, instill a sense of pride among the children on understanding the cultural richness of our country.

This section portrays the strength of the country through the depictions about freedom struggle, battles fought on Indian soil and social reforms. The theme of the gallery is to emphasize India’s unique feature, Unity in diversity. Each portrait here has a story to captivate and educate the children.

Surya means ‘Sun’ and the gallery highlights the importance of the Sun and the origin of the Solar System. This gallery clearly explains all the activities that are related to the Sun like the occurrence of eclipses, changing seasons, photosynthesis, reflection, absorption, plant growth, colors formation and a lot more. It also stresses the festivals that are celebrated as thanks giving to the Sun. It also educates the children on the crucial role of solar energy in modern society. 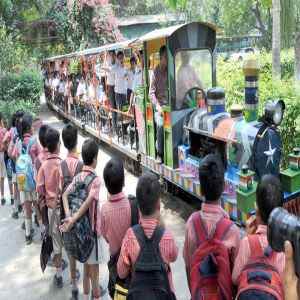 Nearest metro station is Mandi House. Buses on route numbers can be boarded to reach the children’s museum. Autos also are a common mode of transport from any part of Delhi to reach the museum.