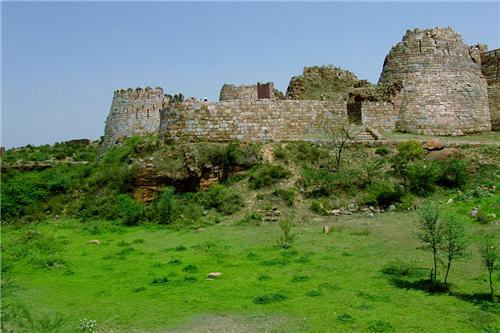 The historic monument of Tughlaqabad Fort is a devastated fortress in Delhi, extending across 4.03 miles, constructed by Ghiyas-ud-din Tughlaq, founder and first ruler of the Muslim Tughluq sequence of powerful leaders, of the Delhi Sultanate of India in 1321.

The slanting and damaged surrounds, a distinctive characteristic of memorials of the Tughluq dynasty, are between 10 and 15 meters tall, crowned by castellated breastworks and beefed up by round citadels of up to two floors altitude.

In Tughluqabad fort history, accounts are there, which alleges the structure to have featured almost 52 gates of which only 13 gates remain now. Furthermore, the bastioned city comprised seven rainwater storage tanks.

Tughlaqabad fort architecture is unique and is carved up into three parts:
The citadel still stands tall in an ominous manner characterized by gloom and mystery; the palace extending over 4 miles appears stupefying for its stateliness.

Open: All days throughout the year

Entry Fee:
Rs. 5 per head (for Indian citizens and members of SAARC and BIMSTEC Countries)
Rs. 100 per head for international visitors
Free for children up to 15 years of age

A lot of choices are available for the visitors as people can choose Govind Puri Metro station (violet line) and with the help of local buses or auto rickshaws to reach the fort will take approximately 45 minutes.
Another option would be taking local transit alternatives from Saket Metro Station (yellow line) which is convenient for people approaching from South Delhi district.

Places of Interest near Tuglaqabad Fort