If knowing about tribals or adivasis of India interests you, Tribal Museum in Delhi is just the right place for you to go and explore about lifestyle, music and culture of different Indian tribal groups.
This museum stands in Jhandewalan on Ambedkar marg and is not much visited. However, there are fascinating figures, musical instruments, dancing sticks, metal-tipped arrows, jewellery and textiles. 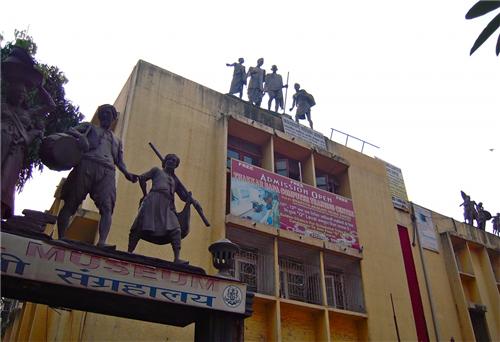 You will be delighted to see wall murals and life size images including that of Mahatma Gandhi. The library contains around 6000 books on tribes which are a rich source of reference for research scholars and students.

There are four halls in the museum. The corridor is lined with plants and leads you to these halls where artefacts such as masks, stone tools, ropes and drums or nagaras have been nicely displayed.One gets to know about the daily life chores of tribal people, their clothing, rural craft and other costumes.

The official name of the building which houses the Tribal museum is known as Thakkar Bapa Smarak Sadan. The museum was set up by an NGO called Bharatiya Adimjati Seva Sangh.

This tribal museum makes for an excellent connecting link between rural population and urban society. You can only marvel at their simplicity and artistic excellence when you glimpse through their handicrafts, culture, day-to-day rituals and other religious beliefs. The museum serves to protect and promote their tribal culture.

The museum manager takes you from one hall to another describing about every article that you may want to learn more about. The dioramas depict the life and festivities of tribal people.
The tribal (aboriginals) have been recognized as Scheduled Tribes in the Constitution of India and they constitute at least 8% of India's total population. Many are on the brink of extinction such as Khaiwar tribe of Madhya Pradesh and others.

Even medicinal plants have been showcased in the museum which are used by adivasis to cure minor ailments. Hunting and agricultural implements have also been exhibited here. The museum deserves more footfalls as very few people visit the museum.