All Delhiites wait for Dusshera and Navratri not only because of the usual festivities that it brings along but because of Ramlila performances that are unique to Delhi and takes place in the evenings. Ram Leela enacts scenes from Ramayana which tells the story of Lord Rama and how he defeated Ravan on Dusshera. Though almost every second locality in Delhi has Ram Lila performances, the most popular ones are in and around Red Fort. 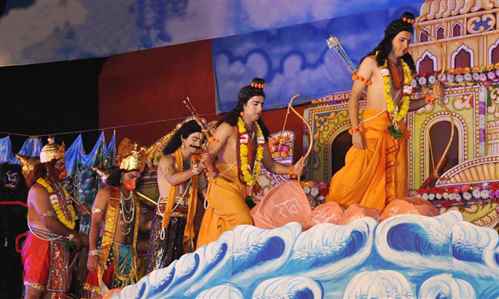 One of the oldest Ram Lila in Delhi, it was started by Mughal Emperor Bahadur Shah Zafar about 180 years ago. It is done in the perfect traditional manner where performers dressed in their costumes parade the lanes of Old Delhi like Chandni Chowk and Nai Sarak.

Established in the year 1979 at Red Fort, Luv Kush, Ram Lila Committee is proud recipient of the best Ramlila committee in the central zone awarded by the Nav Bharat Times. It is now popular for all the modern techniques that it has included over the years. Luv Kush Committee also invites famous Bollywood personalities. The effigy burning of Ravan takes place with special effects.

If you do not want to watch Ram Lila at Red Fort because of overcrowding or any other reason, head to Shri Ram Bhartiya Kala Kendra that has still date done more than 2000 shows. The duration is only of 3 hours and is known for English translation of the play with special effects. The show usually runs for a month starting from the first day of Navratri. Tickets are available at the Kendra.

The Committee which has been in existence since 1958 is another popular Ram Lila which one should not miss in Delhi. The effigy which is created here is one of the tallest in Delhi. The drama is captivating and along with the performance one can enjoy the mela as well.

Shri Ram Dharmik Leela Committee is the latest addition to the long list of Ram Lila in Delhi. Started in the year 2000, it is has been organizing at Ramleela Maidan in Keshav Puram in North Delhi. It is one of the best and popular Ram Lila performances in North Delhi.

Some  of the other popular plays organised in the city are:


Explore more about Culture of Delhi