The South West District has a strategic importance as it houses both the airports in Delhi - The Indira Gandhi International Airport as well as the domestic Airport at Palam. 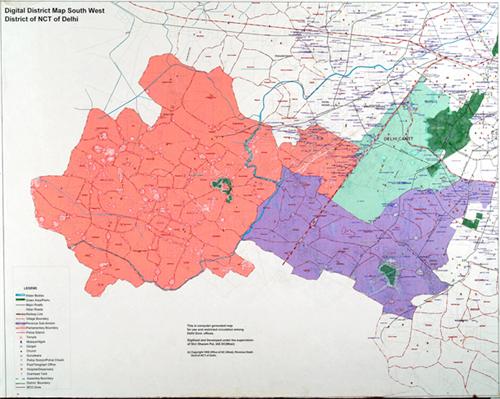 The R.K. Puram area of this district also has a large number of Government officers. It also marks the distinction of having the biggest colony in Asia at Dwarka at the extreme end of South West District.
On the other hand, R.K. Puram is the largest Government colony in Asia also comes under this district. The Palam village is the head of the Panchayat of 365 villages.

Location and Geography of South-West Delhi

A variety of administrative services are offered by the Office of the Deputy Commissioner (South-West) to the public which includes:-

Organizational Set Up of South-West Delhi

The District Administration is a bridge between the common men and Government. This system has been adopted even before independence and has a very long tradition in India. The Deputy Commissioner (DC) is head of the district followed by additional District Magistrate (ADM).
The ADM of the Southwest Delhi district functions as the Land Acquisition Collector and carries out the functions of assessment of compensation for land taken over for public purposes, acquisition of land and taking over possession of land.

The district is further divided into three sub-divisions and SDM or sub divisional Magistrate is the head of each subdivision. Each Subdivision is having clerical and revenue staff for its various functions. For revenue functions each subdivision has its Naib- Tehsildar, Tehsildar, patwaris and Kanungo. And for other functions, there are the clerical staffs.