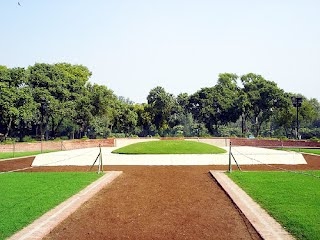 is the memorial of Pandit Jawahar Lal Nehru, the first prime minister of our country. He was born on 14th November 1889.
The memorial is located just adjacent to the Rajghat Many foreign delegates and Heads of the State are often seen visiting the monument and paying their tributes by offering flowers and wreaths to Pandit ji, as he was popularly known as.
The lawns are well maintained and as a result the people of the area prefer them for their morning and evening walks as well. There is immense greenery all around and maybe that is the reason that the place got its name as Shanti Van, which means ‘forest of peace’.
The last rites and rituals of the late prime minister were performed on May 27th 1964 and since then a tomb of stone has been established in his honor. A prayer service is a regular affair every year on the birth and death anniversary of Pandit ji which is accompanied by some cultural programs by children. Pandit Jawahar Lal Nehru was also the longest serving prime minister of independent India for over 15 years.
The word knows the fascination that Pt. Jawahar Lal Nehru had for kids, due to which he also got the name Chacha Nehru. His birth anniversary was officially declared as ‘National Children’s Day’.

It is open on all days from 5:00 am to 7:30 pm for both national and international visitors and they need not pay any admission charges. Photography and videography is allowed. The only thing that visitors need to keep in mind is that they need to remove their footwear before entering the memorial. One can also pick up a garland, some flowers or a wreath and place it on the tomb stone as their tribute.

The monument is centrally located and can be easily reached by private or public transport. It is situated on Mahatma Gandhi Marg and is in close proximity to Raj Ghat, the memorial of Mahatma Gandhi. The nearest metro station to Shanti Van is Chandni Chowk. Shanti Van is situated at a distance of about 3.5 km from the Old Delhi railway station. And the distance from IGI airport is around 21 km.

Next to Shanti Van is the memorial of Sanjay Gandhi, the grandson of Pt. Nehru and the son of Indira Gandhi. He was cremated here in 1964. Apart from these memorials, the Feroze Shah Kotla cricket stadium is also at a very close distance to Shanti Van.

So the next time you plan a visit to Delhi make sure that you don’t forget to visit these historical places, Shanti Van especially which speak volumes through their silence.