If you are looking for a family restaurant, delicious food or reasonable rates, Saravana Bhavan is the common place. This restaurant was initially established in Chennai, now its food chains are all across the globe.
To name a few cities in India, it covers metropolitan cities like Delhi, Mumbai and Bangalore etc. Saravana Bhavan has not only one outlet, its franchisees are spread internationally.  In United States of America itself, it has seven outlets including cities such as New York, Texas, California and New Jersey. In UK they have six outlets in the popular cities such as Middlesex, London, Harrow and Essex.
The other countries like Dubai, Oman, Singapore, Malaysia, Canada, Quwait, France and Germany. Saravana Bhavan is located in couple of places, where the Janapath outlet is comparatively smaller to the other one which is located in P-block, Connaught Place. 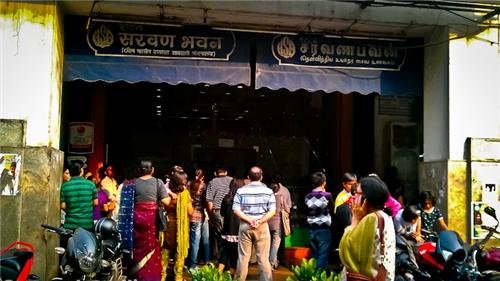 It is very important to have some patience, as the entrance happens in cue system as both the outlets in Delhi are mostly crowded. The crowd is a mixture of foreign tourists, localities and from other parts of the country, mostly South Indians.
While waiting in the cue, one will not miss noticing the guy with gajra (flower garland) in basket. The fragrance of jasmine from those garlands can be smelled from a certain distance. Speaking of the delicacies of the dishes, one must try filter-coffee, which is served in a unique way. It comes in a steel bowl and a steel glass with a lot of foam on the top.
The irresistible taste of the coffee is achieved via traditional south Indian style of filtering the coffee beans. The special Chennai style pappad is famous in both the Delhi outlets and it’s good to try from any outlet. 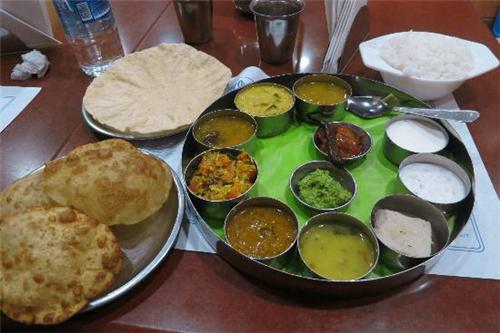 Once entered finally after a few minutes of wait, the classical music, and some soothing south Indian flavours welcomes you warmly. Steamed Idli with coconut chutney and sambhar is one of the delicious yet healthy dishes served here. The chutney is so delicious that one might want to order more of it and no special charges are applicable.

Appam with side dish is something not to be confused with uttapam. Appam is again one other delicacy which is absolutely healthy as it is oil free steamed food. The side dish is one of its kind and it is made of cauliflower and some tasty spices.

Dosa comes in a huge variety ranging from butter, vegetable, masala and many more. Dosa is served along with three varieties of chutney made of coconut, tomato and mint. Sambhar is served as many times as you want it.

They also serve some fruit desserts which are not very exciting though. But while paying the check they serve a kind of sweet coated fennel seeds which helps digestion.