Safety of Women in Delhi

Safety of women in Delhi is one of the much talked about topic today and the Delhi government along with the Delhi police department has taken many measures on women safety in Delhi and to prevail the harmony of the capital city. 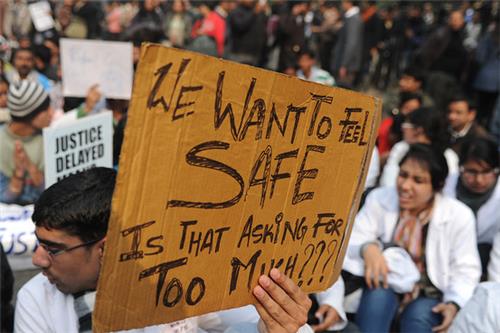 The government of Delhi has taken many serious steps to ensure women safety like the formation of Mahila Suraksha Dal, organizing street plays and programs on various women oriented themes to bring awareness among the locals, installing cameras in public places & Delhi roads, organizing self-defense training for women, banning taxi service agencies that are issuing false police verification certificate to its drivers and many other steps proposed where still under serious discussion to ensure women safety.

Apart from these the Delhi government is also planning to provide sensor devices to women which can alert their family and friends when they feel unsafe in any situations, these sensor devices can be attached to a mobile phone or finger rings and the government advised BPOs not to work women on late hours so that they can return home safely and early.

The government also enforced strict laws on private and commercial buses & vehicles that run in Delhi like while on off-duty the vehicles should be parked only with the owners and while traveling on nights the vehicles should not turn off the lights or can close the windows with curtain.

Initiative taken by Delhi Police for a Safer City

The Delhi police has taken many noticeable steps for women safety like women police surveillance outside schools and colleges, recruiting more women cops, appointing minimum one women constable in every police station, assuring completion of investigation on women exploitation cases within 20 days if not forwarding the case directly to the Joint Commissioner of Delhi, 24 hour helpline to aid women, nearly 370 new PCR i.e. Police Control Room vehicles are brought for Delhi police department all with GPS system for roaming and surveillance. Also the Delhi police also checks for drunken drivers on road.

Mahila Suraksha Dal or MSD is a project proposed by Delhi government to reenergize the national capital as a safer place for women and children. The mission of MSD is to bring a change in the society to act or respond against women issue instantly. The Awaaz Uthao Project which was initially formed by the Delhi government to address women safety issues was strengthened more and renamed as Mahila Suraksha Dal.

The MSD members are from NGOs, retired defense personals and volunteers from public. The project also conducts programs to empower women and to help them gain confidence. Currently many volunteers have shown interest in enrolling themselves with MSD. The MSD volunteers will form  groups and visit a locality where they meet people in person and help them to overcome their suffering.

The Safe Delhi campaign initiated by JAGORI operates with an objective of mobilizing people in Delhi to act and make the change in the society. Since it’s the responsibility of the society to let women enjoy her freedom and rights not fear. The campaign mainly concentrates in developing tactics to ensure safety of women in Delhi.

Delhi Police have also started the "Himmat" app for women across the city who can easily initiate a distress call to the police in case she feels unsafe any time of the day.