Delhi, with growing times has emerged as a cosmopolitan city, synthesizing people, language and culture from across the country. Delhi lives by its own beliefs and culture, but the endearment of its people to their religion and regions can be seen during festivals.
Delhi is a state of diverse religions.  Although the city has strong history of Persian, Tuglaq and Mughal rule which inspired Islam into the region, but present-day Delhi is Hindu dominated. Starting from Raksha-bandhan, Delhites celebrate all the festivals from Id, Gurupurab to Christmas and New Year. 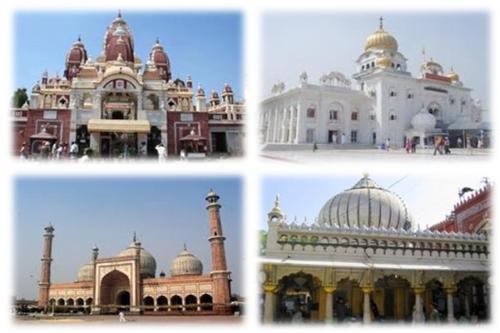 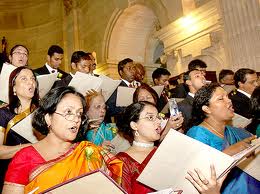 Advent of Christianity in Delhi dates back to the times of Shahjahan, when Delhi started witnessing the rise in the number of Christians. Christianity in Delhi was introduced for second time during British rule, when many British soldiers built churches for their worship.
Since Delhi is a hub of all religions, you can see people in Delhi partying in restaurants, hotels and banquets to Celebrate Christmas. A special Christmas Carnival sale in Connaught Place is another attraction in city during Christmas.

Hinduism has been existent in Delhi since the times of Pandavas. Any traces of Hinduism before that is not traceable in history. There have been rules of Islamic dynasties for centuries, but the invasion of Marathas and, partition in 1948, lead to migration of Hindus in Delhi.
In 1948, Hindus from Sindh migrated largely to Delhi fearing the violence. As much as 80% of Delhi’s population follows Hinduism. All the major Hindu festivals are observed with a lot of enthusiasm even among people of other religions.

Sikhs are Delhi's most important set of community. This Punjabi speaking community holds a strong sentiment to their religion, and Delhi of course has a strong influence of Sikhism among its Punjabis. British victories had bought Sikhs from Punjab to Delhi during 1803.  Again, during partition, Sikhs of Pakistan migrated to Delhi. Delhi has many important Gurudwaras and many Sikh Gurus have honored the city during their times.

During medieval times Jats migrated to Punjab and further to Delhi. Present day Delhi has a major Jat population.  Most of the Jats ascended from the families of landed barons and landlords.  These robust farmers settled in Shahpur Jat area, which has now turned into a wealthy Jat colony.  Infact the state has derived its name from Dhillion Jats.

Nearly a third of Delhi’s population is Punjabi speaking. Since people living in Delhi are mostly Punjabis, Delhi is also sometimes misled as a ‘Punjabi City’. They have gained prominence as urban, literate people essentially living with middle-class professions. Their origins lie in Punjab and Pakistan regions. Delhi has a lot of Punjabi Hindus, Punjabi Muslims, Punjabi Sikhs and Punjabi Christians who basically follow the culture from Punjab.

Many migrants from Bihar come to Delhi to earn a living. Many Biharis engage themselves in manual and physical jobs. These hardworking generous lot of migrants can be seen doing a variety of jobs. Biharis also dominate the top level jobs at the centre. Delhi is a second home to almost 30% of Biharis.

Gujratis form a substantial part of business community in Delhi. Gujaratis have formed Gujrat Samaj to bring the Gujratis of the state together. The Samaj was set up by a few initial settlers of Gujarat in Delhi.  Gujratis and their culture come alive in Delhi during Navaratris when these people take part in Garba. People not only from Gujarat but non-gujaratis can also be seen in Guajarati attire to take part in Garba.

A large number of Assamese move to Delhi for education and jobs. These people seek Delhi mainly for education and stay in Delhi as students. Assamese residents in Delhi have formed ‘Assam Association- Delhi’, with an objective to hold social and cultural functions and festivals related to Assam.

Delhi’s current Bengali associations can be traced around 1919, when the British shifted the capital of India from Calcutta to Delhi. The migrants were government employees from postal department, railways, and tax department. Delhi saw more Bengali migrants in 1847 during partition.
Plots were assigned to these people in Chittaranjan Park, so most of the Bengalis are visible in this area.  The energy of Bengalis could be seen in full swing during Durga Pooja, particularly in C R Park, which is also called mini Bengal.


Explore more about Culture of Delhi