The Red Fort is constructed of red sand stones which render it a bright red hue and hence this name ''Lal Qila''. It took around nine years to build this fort (from 1639 to 1648), the chief architects being Ustad Ahmed and Ustad Hamid. During the times of Mughals, the fort was called Qila-i-Mubarak (''The blessed fort'') as it was the residence of the royal family.
It was built by Emperor Shah Jahan, the ''Architect king'', in Shahjahanabad, which is today's Old Delhi area. This largest and also the oldest monument in Delhi was referred to as ''Uru Mohalla'' by Shah Jahan.
The 17th century complex lies on the banks of river Yamuna , is octagonal in shape and covers nearly 256 acres of land. Lal Qila was built at a cost of ten million rupees and served as the Capital and residential palace of Mughal rulers till the reign of Bahadur Shah Zafar.
Red Fort was declared as UNESCO World Heritage site in 2007. People gather in thousands at the Lahore gate every year on Independence day to hear the speech of Prime Minister from the ramparts of Lal Qila. This is also the place from where Prime Minister Jawaharlal Nehru declared India an independent nation on 15th August,1947.
As Lal Qila is near Rajghat and Jama Masjid, it is the most visited historical monument in Delhi, both for its architectural excellence and for its cultural and historical significance. The ''light and sound show'' every evening is a big draw for children and adults alike. 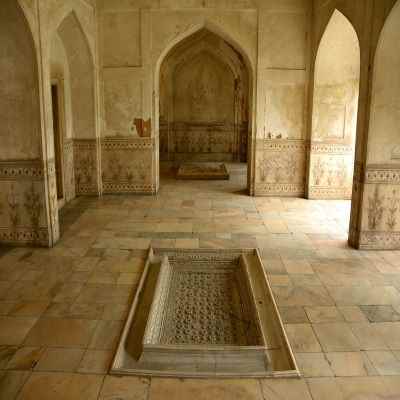 Naqqar Khana or Naubat Khana or simply ''drum house'' is now a war memorial museum. In ancient days, it reverberated with ceremonial music as it was the entrance to the Diwan-i-Aam. It was also referred to as ''hathipol'' because the visitors dismounted from their elephants at this place.
The arrival of the Emperor was also announced by musicians from the Naubat Khana. And a little piece of history here: The later Mughal kings Jahandar Shah (1712-13) and Farrukhsiyar (1713-19) were murdered in Naubat Khana.

It was the meeting room for the public or ''hall of public audience''. The Prime Minister received general complaints and pleas from the public from the marble dais studded with precious stones constructed below the throne.
This hall was used for state functions also. There was a balcony or ''jharokha'' and a large courtyard or ''mardana'' attached.

The walls of the Diwan-i-Aam Red Fort demonstrates artistic finesse with colourful panels inlaid with stones in wonderful designs replicating flowers and birds.
These panels were damaged and moved to Victoria and Albert museum in London but were later refurbished at the instance of Lord Curzon in the year 1903.

This ''hall of private audience'' was meant for private council. This is also the place where the famous Takht-e-Khaus or "Peacock Throne" was placed. This emperor's seat was studded with rubies, sapphires, pearls, emeralds and the Koh-i-Noor diamond.
The throne was decorated with panels of pietra dura work, showing Oepheus with his lute on the central panel and floral designs which looked ravishing. Pillared ''chhatris'' adorned the four corners of the ceiling. Nahr-i-Bihisht flowed through the centre of the hall with water being supplied from Yamuna river through a tower ''Shah-Burj''.
The celebrated  verse of 13th century poet Amir Khusrow  were inscribed in the arches,''Agar Firdaus bar rooe zaminast haminasto haminasto haminast.'' The verse resonated the beauty of the place which meant,''if there is paradise on earth, it is this, it was this, it is this.''

Florentine jeweller and artist, Austin de Bordeaux is said to have decorated the beautiful panels. The present wooden ceiling of this hall was painted in 1911.
Initially two enclosures, one in the west for the Nobles and another in the east for officials not enjoying a very high rank, stood in Diwan-i-Khas. However, these were done away with after the mutiny.
The throne was taken by Nadir Shah, the ''Persian Napoleon'' in 1739.Today, the Koh-i-Noor adorns England's Royal Crown jewel collection. Also, Captain Tytler procured two marble pedestals post 1857 uprising, one of which is in New York Metropolitan museum today.

This ''painted palace''  was a large hall with tiny pieces of mirror set in the ceiling which looked striking. It is named so owing to the colourful and mesmerizing decoration done in its interiors. There were six compartments known as Shish-Mahal or ''house of mirrors''.
The apartments at the north and south ends comprised of marble dados. There was a marble basin at the centre with an ivory fountain and a lotus-shaped fountain carved out of a single piece of marble.
Nahr-i-Bihisht flowed through the centre of the hall rendering an attractive ambiance. It symbolizes the stream of paradise which has been referred to in the Quran.
Males were prohibited from entering this area as emperor's wives and mistresses lived here. Only the emperor and princes could enter these quarters. Messages were reached through eunuchs only!

Tasbih-Khana or ''chamber for counting beads for private prayers'' consists of three rooms. Khwabgah or ''the sleeping chamber'' is situated just behind these rooms.
Adjacent to this chamber is the Muthamman-burj or ''octagonal tower'', which was the place from where the emperor appeared before his subjects every morning to give ''darshan''.
Akbar Shah II added another balcony projecting from the burj in 1808. King George V and queen Mary appeared before people of Delhi in  December, 1911 from this balcony.

Hammam, or ''royal bath'' consisted of three apartments which were segregated by corridors. Rose water gushed out from one of the fountains here. Hot and cold water was provided in the bath.
These were turkish style baths built of stones and were studded with colourful and precious stones. Moti Masjid, or ''pearl mosque'', which stood towards the west, was later added by Aurangzeb.

There were six palaces with ''the stream of paradise'' flowing through them. One of them called ''chhoti baithak'' does not exist today. The Delhi Museum of Archaeology is housed inside Mumtaz Mahal nowadays.
Ladies quarters or ''zenanas'' were restricted towards the southern side of the entire apartment complex. The private palaces for the royal family stood at higher level than the other halls and bestowed a mesmerizing view of river Yamuna.

The set of rooms facing Diwan-i-Khas was called the Tasbih-Khana or ''chamber for telling beads'', which was used by the emperor for worshiping. Just behind these rooms was the Khwabgah or ''sleeping chamber''. Towards the north was a marble panel carved with ''scale of justice''.
Animal fights were organized between lions and elephants etc. below this Khas Mahal and other such palaces and were viewed by the royal ladies and the emperor from their palaces.

This was built by Aurangzeb, Shah Jahan's son and successor, in 1659 towards the west of Hammams or ''royal baths''. The Moti Masjid or ''pearl mosque'' is three-domed, carved in marble and opens into the courtyard. There are outlines of ''musallas'' or small carpets for prayer in the prayer hall. The Moti Masjid stands at a higher level than the courtyard.

Hayat Bakhsh Bagh or "life-bestowing garden" had two of pavilions ''Sawan'' and ''Bhadon'' (named after two important months of rainy season), beautiful fountains, tanks and wonderful flowers and trees. Mehtab bagh or ''moonlight garden'' was another exquisite garden in the fort premises. Bahadur Shah Zafar developed this garden towards the northern section of Lal Qila.
It was the last structural addition to the fort as it came under siege by British forces during revolt of 1857. The British resorted to lot of destruction inside the fort which was restored to some extent by Lord Curzon in 1903.This was the largest among all other gardens which included the Imtiyaz, Bagh-e-Angur, the Jahanara etc.
And after you have visited the palaces and gardens, it is time for the light and sound show in the evening! 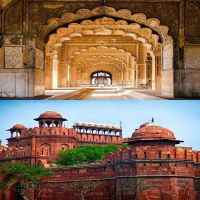 This is indeed a spectacular show and attracts a large number of visitors every evening. The show gives a glimpse of Lal Qila history. It is akin to a visual story telling session which is both captivating and educational.
The show started in October 1996 and since then, it is a great source of entertainment for one and all. During winters, the timings are adjusted by an hour for the convenience of the public.
The light and sound show is displayed in Hindi and English languages with a gap of one hour in between. Tickets are available at the Red Fort ticket booth one hour prior to starting of the show.
Weekdays: Rs. 60 for Adults and Rs. 20 for Children (aged 3 yrs. to 12 yrs.).
Weekends and Public Holidays: Rs. 80 for Adults and Rs 30 for children.
Monday Closed
Show in Hindi: 7:30 to 8:30 P.M.
Show in English: 9.00 to 10.00 P.M.
Contact Telephone Numbers: 011-23274580, 011-23281802