Qutub Minar is one of the finest ancient tall monuments in India. It is the tallest minar in India. An ancient Islamic monument, Qutub Minar Delhi is a UNESCO World Heritage Site. The minar is located at Mehrauli in Delhi. Qutub Minar is made of red sandstone and marble.

Qutub Minar Delhi is surrounded by other ancient monuments and the collection of these monuments is collectively known as the Qutub Complex.

Several legends are found being associated with the origin of Qutub Minar. According to some Qutub-ud-Din Aibak built the minaret as a victory tower to mark the celebration of victory of his master Mohammed Ghori over Rajput king Prithviraj Chauhan.
While some historians also believe that Qutub-ud-din Aibak constructed the Qutub Minar in the memory of a Sufi saint Qutbuddin Bakhtiar Kaki. Some also believe that the minaret was built as Minar of Jami Masjid, a prayer hall or Qutub, which refers to an axis or pole of Islam.
Still some others believe that Hindu ruler Prithviraj Chuahan constructed it for his daughter to see the holy river Yamuna while performing “pujas”. 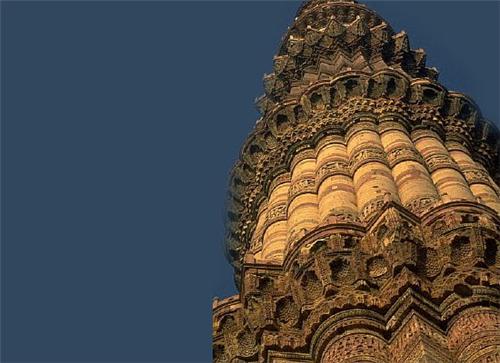 Built by Qutab-ud-din Aibak, Qutab Minar is a tall brick minaret, a reflection of the Islamic and Hindu architectural styles. Qutub Minar is considered another fine example of the architectural styles of the Mughals.
The height of Qutub Minar is 72.5 metres and has five storeys. There are 379 steps in the minar. All the five storeys are marked by a projecting balcony and tapers from a 15 m diameter at the base to just 2.5 m at the top.
First three of the storeys are made of red sandstone and the fourth and fifth storeys are of marble and sandstone. The verses of the holy Quran are inscribed on it.
The inscriptions in Parso-Arabic and Nagari characters could also be found describing the excerpts from the history of its construction. Each of the storeys could be seen surrounded by esthetically decorated balconies.

The Quwwat-ul-Islam Mosque, inside the Qutub complex, was also built by Qutub-ud-Din Aibak. It is the first mosque to be built in India. The Alai Darwaza is the main gateway or entrance to the mosque.

The Iron Pillar stands in the courtyard of the mosque. The Iron Pillar is 7 metres long and lacks corrosion. It is believed that if you can encircle the pillar with your hands while standing with your back to it your wish will come true.
The iron pillar is the largest known composite iron object obtained from the ancient times. It was erected by Chandragupta II Vikramaditya.
Inscription in Sanskrit language indicating its setup as a Vishnudhwaja, standard of god could be seen. There is a cavity at the top of the pillar which suggests that an idol of Lord Garuda was placed in it.

The Tomb of Illtumish lies at the North Western corner of the mosque. It has a square base and stands on a raised platform. Intricate design beautifies the platform. The main cenotaph, placed inside the mosque, is constructed of white marble.
The walls inside are decorated with diamond emblems, lotus designs, tassel and so on. The interior wall has a Mihrab/ prayer niche. Imam Zamin’s Tomb has an octagonal base and is believed to be built by him during his lifetime. Imam Zamin was a saint from Turkestan who came to India around 1500 and settled there.

The construction of Alai Minar was started by Ala-ud-Din Khilji who wanted to make it two times higher than the Qutub Minar. Just after completion of first floor core, however, he died.
It is an 80 metres high rubble masonry core. Alauddin Khilji’s tomb lies at the backside of the Qutb complex. There is also a madarsa and an Islamic seminary.

Before 1981 the general people could climb to the top of the minar. However in 1981 there occurred an accident where around 45 people were killed in a stampede as there was a power cut inside the minar. After that horrific incident public access to the minar has been forbidden.

Qutub Minar is one of the most favoured destinations of tourists. Qutub Minar is surrounded by a lush green garden where tourists can enjoy a leisurely time.

How to Reach Qutub Minar

Qutub Minar is easily accessible from all corners of Delhi.

By Air: The nearest airport to Qutub Minar is the Indira Gandhi International Airport at Delhi. From the airport car, pre paid taxis, air conditioned and non A/C coaches etc are available which will take you to the Qutab Minar.
\
By Rail: New Delhi Railway Station is the nearest railway station to Qutub Minar. From here taxis and cars are available to reach Qutub Minar.