The Old fort at Delhi is one of the oldest and secular structures of the country and is also known as the Purana Qila. The walls of the fort tell a tale that dates back to the 14th century AD.

The foundation of the city was laid by Mughal Emperor Humayun. This city was considered as 'the refuge for the faithful' or Dinpanah.

It is the inner citadel of this city which was re built by the Sur dynasty King Sher Shah Suri.  One more interesting fact about the site is the history before it was rebuilt by Sher Shah Suri; it is believed by many historians that the capital city of Pandavas i.e. the Indraprastha was situated exactly at the same site as the fort.

Also the Archaeological Survey of India found Painted Grey ware dating back to 1000 BC making the history of this site almost 5000 years old. Then came the era of British Raj and the planner and architect of Delhi Edwin Lutyens aligned Rajpath or the central Vista with the Old fort of Delhi.

After the Independence when India got divided into Pakistan and India the refugees migrating to Pakistan took refuge here at the Purana Qila and the Humayun’s Tomb, as the trains to Pakistan started by October 1947.

Later in 1970 this fort was for the first time utilized as a backdrop for theatre by National School of Drama for showcasing three plays namely: Tughlaq, Andha Yug, Sultan Razia.

Many more plays, cultural events and concerts have been organized in the past here at the Old Fort. Nowadays it is known for the sound and light show based on the history of seven cities of Delhi starting from Indraprastha to present day Delhi.

This fort has many gateways like the Bara Darwaza towards west (west gate is also the main gate), Humayun’s Gate facing south towards Humanyun’s tomb and the Talaqi gate which is often referred as the forbidden gate.

All the gateways are bordered by semi-circular bastion towers and are made of sandstones decorated with marble and blue tiles. Jharokhas and chhatris give a Rajasthani appeal to the architecture making it secular in character. Purana qila is surrounded by wide moat which is further connected to river Yamuna. 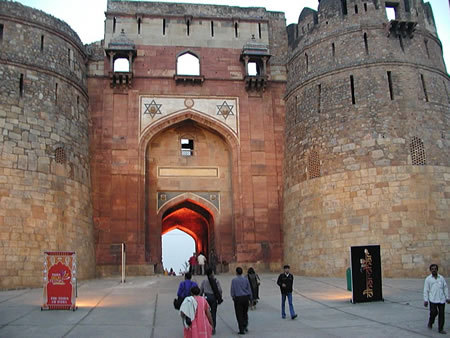 Other notable structures of Purana Qila Delhi are the Sher Mandal and the Qila-i-Kuhna Mosque built by Sher Shah in 1541; to visit this mosque one doesn’t have to belong to a particular religion as persons from all religions are welcome here.

The Sher Mandal happens to be the first observatory tower of Delhi and it was later converted into a library by Humayun; unfortunately it was this place where Humayun fell from the second floor and died a tragic death.

The library building though attached to such a heartbreaking tale, is one of the finest preserved structures in the fort. Apart from the mosque and the library Baoli happens to be another important construction found inside the fort, it is 22 meters deep and has 89 steps with appropriate covering which is a cumbersome task even by present day standards.

The old fort stands oblivion near Mathura Road. Most of see it every day and in a way take it for granted however, a lot lies beyond the walls of the fort and it is unimaginable.

Other charges: Rs. 25/- for taking videos of the place

How to reach: Old fort in Delhi is situated near Delhi zoo on Mathura road. It is in proximity with India Gate and Humayun’s tomb. Nearest Metro station is Pragati Maidan station which is on the blue line.

Hence, when monuments on mind do start with Delhi’s oldest structure it tells a story that dates back to hundreds of years and represents variety of cultures and architecture. A visit to Old Fort will give you an overview of what lies ahead when it comes to visiting monuments in Delhi.