Far from the madding crowd, Delhi has a number of beautiful parks visited frequently by tourists. These parks witness large number of tourists both from within Delhi and outside Delhi.

The Buddha Jayanti Park was created to commemorate the 2500th anniversary of Gautama Buddha attaining Nirvana. The park is situated in the Delhi Ridge and has a 2.5 ft Buddha statue.
One of the significant characteristics of this park is that a sapling from the original Bodi tree under which Gautama Buddha attained Nirvana is planted in this park.
The park has beautiful lawns and flowers all around which sets the perfect backdrop to relax amidst nature. Both Delhites and tourists from across visit this park for its beauty.

There is also a 2.5 meters Gautama Buddha statue atop a pavilion in the park. A circular path named Parikrama leads to the pavilion and there is also a low lying embankment which is bordered with small beautifully colored stone rings, with each color representing elements defined in the Kalachakra Mandala.
This statue was dedicated by Tibetan Monk the 14th Dalai Lama on October 1993. The park witnesses the festival of Buddha Jayanti every year with much fervor.
Buddha Jayanti Park Delhi also witnesses various discussions and discourses on Buddhism held by different Buddhist organizations.
How to Reach:

The nearest metro station to Buddha Jayanti Park is the Rajiv Chowk Metro Station. The park is open on all days and one can also take buses and auto rickshaws from any place in Delhi to this park.

The Indraprastha Park is located along the Ring Road in Delhi and was created by Delhi Development Authority with an aim at transforming sanitary landfill areas into proper living, breathing and lush spaces.


There is also a World Peace Stupa erected in the park. The Indraprastha Park (IP Park) was opened on 14th November 2007 by monks and nuns, the Dalai Lama and by the honorable Governor of Delhi.

The nearest metro station is the Indraprastha metro Station. One can take local buses and auto rickshaws from any place in Delhi.

The Mahatma Gandhi Park is located near the Old Delhi Railway Station on the Church Road. It was constructed during the time of British Rule and was called the ‘Queen’s Park’ by the Britishers. Post independence, it was renamed as Mahatma Gandhi Park.
It is also popularly referred to as ‘Company Bagh’ in reference to it being a primary part of European social life in India.
The park has an open air club and a cricket ground which was used for playing cricket, the game popular with the British.

There is also a statue of Mahatma Gandhi, Father of the Nation erected in memoriam of the great leader.
The park also acts as a host to a number of events and festivals which are held here.
The park opens only on Sundays; however it is also opened on other days for events which are to be held here.

The nearest metro station is the Delhi Main Metro Station. Old Delhi Railway Station is the nearest railway station to the park.
One can also take local buses, auto rickshaws and taxis from various areas in Delhi to this park.

The Netaji Subhash Park is located opposite Sunehri Masjid on Netaji Such as Marg. The park shares its borders with another park, the Urdu Park and is popularly known for the maalishwalas (body masseurs) present here.
The park has a statue of freedom fighter Netaji Subhash Chandra Bose in military attire built in his memoriam. 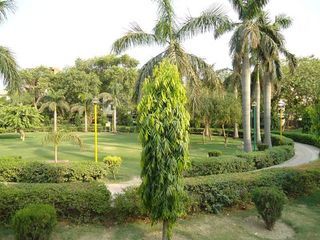 Chawri Bazar metro Station is the nearest metro station to the park. One can take a rickshaw to reach the park from the metro station.
One can also get DTC buses and taxis from across Delhi to this park. The nearest railway station is the Old Delhi Railway Station. The park remains open on all days.

The Deer Park is a green landscape stretch located near Delhi lawn Tennis Association in Chanakyapuri area. The park is easily accessible both from Hauz Khas village and Safdarjung Enclave.
The park is beautified by lush gardens, trees, a pristine water body and tombs of the Mughal Era. One can also spot rabbits, peacocks, guinea pigs and deer in the Deer park of Delhi.


The park is divided into four sections, viz. the Rose Garden, the Deer Park, the Fountain & District Park and the Old monuments & Hauz Khas Art Market.
These four sections together are called the ‘Lungs of Delhi’ as they provide fresh air and oxygen to Delhi.

The nearest metro station to the Deer park is the Green Park Metro Station. Nizamuddin Railway Station is the nearest railway station and one will also get buses and auto rickshaws from other places of Delhi to the Green Park.

The Nehru Park was established in the year 1969 and is located in Panchsheel Road near the Chanakyapuri Diplomatic Enclave. This park is significant for it houses rocks and moulds inscribed with the sayings of Pt. Jawaharlal Nehru, India’s first Prime Minister.
These concerts are held every Sunday for duration of two hours and hosts performances by several eminent musicians. There are also free yoga classes conducted regularly by the Delhi Tourism and Transportation Development Corporation.

There is also a statue of the leader of Great October Socialist Revolution, Vladimir Lenin installed in the year 1987 during the 70th anniversary of the October Revolution.
On 22nd April, every year members of Communist Party of India and Left oriented political parties visit the park to observe Vladimir Lenin’s birth anniversary.
How to Reach:

The nearest metro station is the Central Secretariat Metro Station. New Delhi Railway Station is the nearest railway station. One can get buses and auto rickshaws from different parts of Delhi to Nehru Park.

This Park is located near India Gate and is popular among the children. The park has beautiful lawns, flowers and greenery all around. There is also free space all around where children can play around. Small children can be often seen playing, sliding and swinging in the park.


Other Important Parks in Delhi