The Purana Qila (Old Fort), located near the Delhi Zoo on Mathura Road is one of the oldest monument existing in Delhi. The excavations of Purana Qila carried out by Archaeological Survey of India in 1955 and then from 1969 to 1973.
The evidence of earliest settlement at this site datable to around 1000 B.C, represented by Painted Grey ware and with a continuous cultural sequence from Mauryan to Mughal through Sunga, Kushana, Gupta, Rajput and Sultanate periods.

The construction of Purana Qila Delhi began in 1553 by the Mughal Emperor Humayun and was completed in five years. The Qila served as a fortress for Humayun's dream city of Dinpanah.
The fort was named Shergarh or Shershahi after Sher Shah Suri defeated Humayun in 1940 and destroyed most of the structures of Dinpanah. Later after Sher Shah Suri's death, Humayun again conquered the Fort and utilized the constructions done by Sher Shah Suri to complete Dinpanah.
The walls of the Old Fort Delhi run for about 2 kilometres and are almost 18 meters high. The Fort has three arched gateways - Bada Darwaza, Humayun Gate and the Talaqi Gate all build from red sand stones.
Qila-i-kuhna mosque built by Sher Shah Suri in 1941 still exists in the premises.These beautifully crafted massive structures attracts tourists in large number. Purana Qila is also the venue for the spectacular sound and light show held every evening. 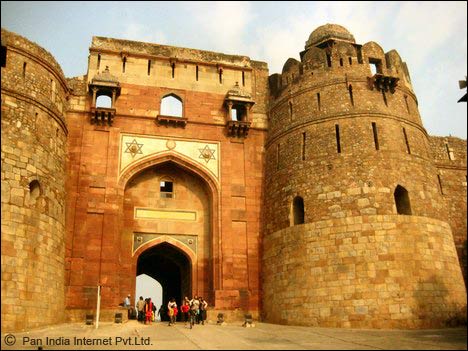 Purana Qila can easily be reached through DTC buses and hired autos. The National Zoological Garden is also located next to the fort.


Explore more about History of Delhi