With increasing passengers pressure from all over the world at existing station of Delhi railways namely old Delhi railways station, new Delhi railway station its has become necessary to have additional railway terminal.
The station was inaugurated on 19 December 2009 by the then Union Railway Minster, Mamta Banerjee and the Chief Minister of Delhi, Sheila Dikhshit.
It is one the largest railway stations, the terminal spread over 42 hectares and caters to all east bound trains from Delhi to Uttar Pradesh, Bihar, West Bengal, Orissa and other north eastern states.
These trains have to cross the bridge over the river Yamuna as all the other stations are placed on other side of Yamuna River. To solve the problem of travellers, Anand Vihar was selected in the Trans Yamuna region to construct a mega railway terminal. 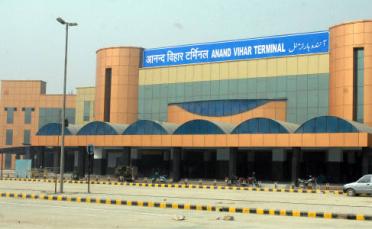 Gradually many trains will be shifted from New Delhi and other stations to Anand Vihar, to manage the load of passengers. The station will also have additional number of platforms and it will be able to handle over three lakh passengers after the constriction of Phase II.

More than 270 trains will run daily. Phase II of the Anand Vihar will involve linking of the new with the original Anand Vihar station.