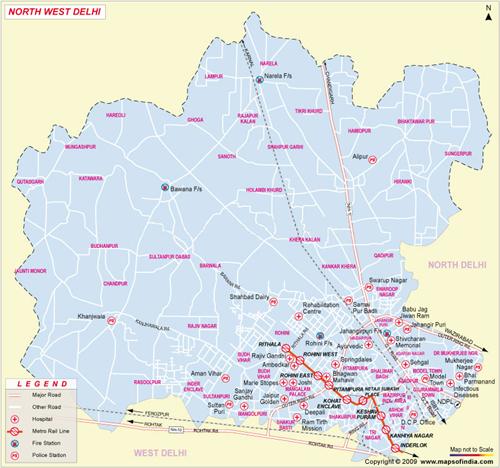 The Deputy Commissioner is the head of the District.  The second in command is the Additional District Magistrate (ADM) .  The Nortwest District is divided into into 3 subdivisions. The head of each sub division is the Sub Divisional Magistrate (SDM).
The subdivisions for its various functions have its  revenue  and clerical staff. For revenue functions each sub-division has Tehsildar, Naib-Tehsildar, Kanungo and Patwaries.

Following are the addresses of the three SDM offices

There are two offices of Sub Registrar in the district directly under the control & supervision of the Deputy Commissioner.

Address of the Sub-Divisional Sub-Registrar offices:

The Office of the BDO (NW) which is also a part of the office of Deputy Commissioner is responsible for the Gaon Sabha land and growth of horticulture, agriculture, and developmental activities in the village. The Block Development officer is the head of the BDO office. The NIC centre of the Northwest District helps in computerization in the district thereby linking the district to the whole world