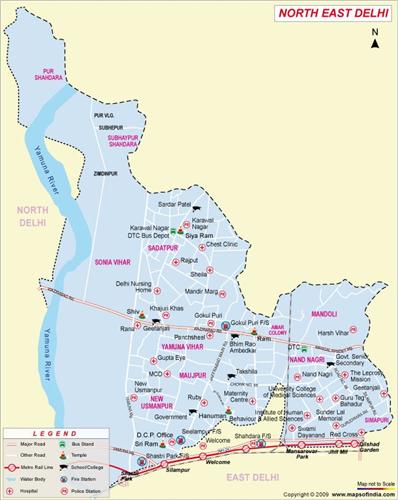 North East Delhi district is one of the nine districts of NCT of Delhi. The district came into existence in January 1997 when Delhi was divided into nine revenue districts.
The North East district has its district head quarter at D.S.I.D.C Complex, Nand Nagri, has a great historical, social, economical & cultural importance.
North East Delhi is bordered by Yamuna River on the west, Ghaziabad District on the north and east, East Delhi on the south and North Delhi on the west across the Yamuna.

The District administration carries out a variety of functions that include magisterial matters, revenue courts, issuing of various statuary documents, registration of property, conduct of elections, relief and rehabilitation, land acquisition and various other administrative areas.

The north east district of Delhi has the following three sub divisions.
Shahdra has been divided into two zones of the Municipal Council of Delhi of which the main wards are North Shahdra and South Shahdra. Shahdra has also been divided into old Shahdra and new Shahdra. Some of the other important areas of north east district are - Dilshad Garden, Dilshad Colony, Tahirpur, Preet Vihar, Yamuna Vihar and Bhajanpura.

The district has the following towns –

Delhi metro has connected various parts of Delhi and has certainly been a boon for all the commuters. The north east district of Delhi is served by the Red Line of the Delhi metro.

The following stations fall in the area of north east district –