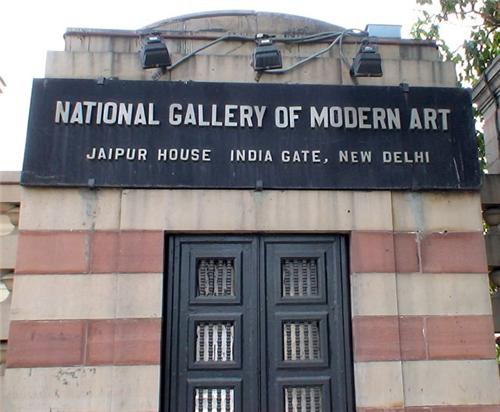 The historical national capital city of New Delhi is host to several historical sites, parks, museums, theaters, and forts. However, it fuses the past with the present by housing the National Gallery of Modern Art.

Since art flourishes here, the country saw the need to preserve and protect its unique craftsmanship and art forms by promoting various art forms and so keep the tradition of Indian art alive and in our midst.

The idea of having a National Art Gallery was first proposed in 1949 by the then Prime Minister, Jawaharlal Nehru and Maulana Azad, and art conscious bureaucrats such as Humayun Kabir. On March 29, 1954.

The National Gallery of Modern Art (NGMA) was inaugurated by India’s Vice-President Dr. S Radhakrishanan. It was decided to use Jaipur House, a leading stately edifice of Lutyen’s Delhi, to bore testimony to the high-profile stature of this gallery.

Jaipur House was designed by Sir Arthur Bloomfield as the Maharaja of Jaipur’s residence. It is a butterfly-shaped building with a dome in the middle and was built as early as 1936.

It was based on a concept of the Central Hexagon, as Sir Edwin Lutyens had visualized. Jaipur House was designed to encircle the India Gate area. The building was made distinctive by this famous architect by putting together several harmonious facades.

The gallery’s inauguration was held with an exhibition of sculptures. Famous sculptors of the time such as Debi Prasad Roy Chowdhury, Sankho Chaudhuri, Ramkinkar Baij, Sarbari Roy Chowdhury, Dhanraj Bhagat among others exhibited their work here.

The first curator of the National Museum Of Modern Art was the famous German art historian, Herman Goetz, also responsible for establishing the Baroda Museum. Over some time, the gallery added on new facilities such as art restoration, a documentation center, and an art reference library.

Aims and objectives of NGMA:

The main aims and objectives of the National Gallery of Modern Art Delhi are to acquire and preserve modern art collected from the 1850s to the present times. This gallery is also responsible for developing, organizing, and maintaining galleries to make permanent displays possible.

It also organizes special exhibitions at its present location and in other parts of the country and abroad. This gallery is also concerned with developing a documentation center and an education center which would acquire, preserve and maintain documents about modern artworks.

Another chief aim of this gallery is to develop an art library of books, photos, journals, and audio-visual materials. Besides the above, this gallery is also into organizing lectures, conferences, and lectures and encourages students to take advanced courses and undertake research in art related-subjects such as art history, art appreciation, art criticism, museology, and the relations between the visual and the performing arts.

Apart from the above, the gallery’s chief concern lies in ensuring that its quality of work is always excellent. Lastly, the NGMA teaches people to appreciate modern art with understanding, knowledge, and joy. 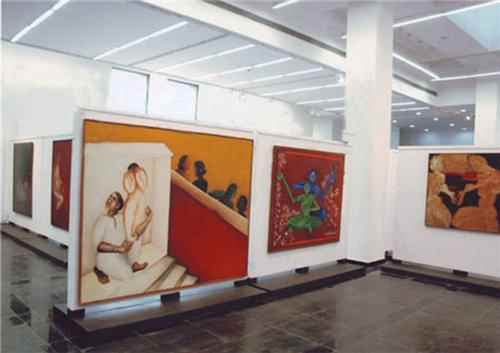 Noteworthy are the paintings "Temple Door" by Gaganendranath Tagore, Tyeb Mehta's "The Gesture no.2" , Ram Kumar's "Flight" and "Mataji" by Anjoli Ela Menon.

Situated at the far end of Rajpath, this gallery faces the India Gate. The gallery is housed in the former palace of the Maharaja of Jaipur, hence it is known as Jaipur House. Structure of the gallery: The NGMA is India’s premier institution in this space. It is run as the Department of Culture, Government of India’s subordinate office. It has two national branches—one at Mumbai and another at Bengaluru.

This National Gallery Of Modern Art, Delhi holds a lot of significance to the people of India because it is a repository of the country’s cultural philosophy. It is responsible for showcasing the art forms that have changed and evolved over the past 150 years, beginning from 1857 in the area of Visual and Plastic arts. Today, the collection of art at this museum is the best in terms of contemporary and modern art in India.

The NGMA is India’s top art gallery. It has a fantastic collection of over 14,000 works of artists such as Raja Ravi Verma, Abanindranath Tagore, Rabindranath Tagore, Jamini Roy, Thomas Daniell, Gaganendranath Tagore, Nandalal Bose, Amrita Sher-Gil and foreign artists too, besides sculptures by several artists. Some of its oldest collections go all the way back to 1857.

Apart from the art work, this modern art museum, Delhi expanded its operations with an additional wing which increased the gallery area by over six times. At first, this gallery was meant for concerts but later it was converted into an art gallery.

Photography is allowed on the first floor of this gallery but on the second and top floors where fine art paintings are exhibited, photography is not allowed.  Bags and cameras too aren’t allowed inside. There is strict security all over the gallery and as you walk through the gallery, you will find yourself in a peaceful environment.

The gallery is open to visitors from 10 am to 5 pm except on Mondays and national holidays.