Delhi is said to have been ruled by over 80 rulers. It is believed that this historic city was blessed with around 1300 monuments. Mehrauli Archaeological Park belongs to the league and consists of more than 100 historically significant monuments.


A sneak peek into the History

Mehrauli is one of the seven ancient cities that make up Delhi. Presently, the area is in the South-west district of Delhi. It has served has a capital city of some important dynasties in the past. It is the only area in Delhi known to have been continuously inhabited for around 1000 years. The first fortification of the city of Delhi, Lal Kot was founded by the Tomar Dynasty in the Mehrauli area.

Balban's Tomb is the first monument that one comes across in this park. It is the tomb of Ghiyas-ud-Din Balban, a ruler of the Mamluk/ Slave dynasty. It has a unique importance in the history of Indian architecture as the first true arch was built here. The grave of Balban's son, Khan Shahid also lies in the vicinity. The tomb provides a spectacular view of the Qutub minar, which lies close to the park.

The Jamali Kamali Mosque is an impressive example of early Islamic architecture in India. Jamali was a pseudo name given to Shaikh Jamal Kamboh, who a known sufi saint of the times of pre-Mughal era. Kamali was an unknown person but both of them were buried adjacent to each other.

Hence, both the Tomb as well as the mosque is named after them. This 16th century mosque is made up of red sandstone and has marble detailing. The courtyard has five arches, each of which is decorated beautifully.  Jamali was a popular poet and the walls of the tomb are resplendent with inlaid colorful tiles, with his poems inscribed on it. The tomb is located next to the mosque and is square in shape, with a flat roof. 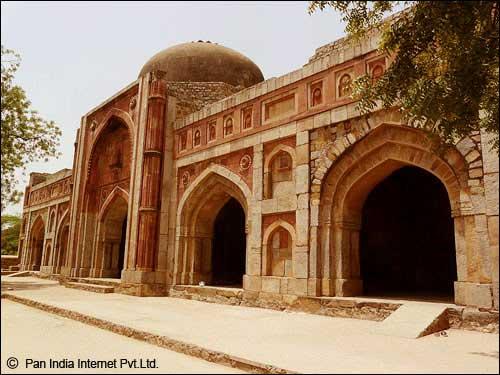 One of the most interesting facts about this archaeological park is that the monuments are located close to each other, presenting an admirable labyrinth of different historical periods in the minds of the visitors. Rajaon Ki Baoli and Gandhak Ki Baoli are the two step wells that can be found here. Gandhak Ki Baoli is Delhi's oldest surviving Baoli and was built by Illtumish. Rajaon Ki Baoli is located at one end of the archaeological park.

It is much bigger and beautiful in designing when it comes to comparison with the Gandhak. It was built by Daulat Khan, during the reign of Sikander Lodi, for the masons or rajmistries. This three storyed step well has colonnaded arcade and is decked out in plasterwork. According to some legends, Baolis were a favorite haunt of fairies.

The Zafar Mahal is possibly the last monumental structure to be built by a Mughal ruler. The Mahal/ Palace was built by Akbar Shah II and the entrance gate to the mahal was renovated by Bahadur Shah Zafar II, who was the last ruler of the Mughal dynasty.

Zafar was exiled by the British Army to Rangoon in 1857. The Palace is built in red sandstone and has three floors. The entrance was also known as the "Hathi Gate", mainly because it was so big as to allow decorated elephants to pass through. European as well as Mughal architectural trends invade the entire palace, which is now a ruined structure.

Moti Masjid was built by Bahadur Shah Zafar I. This white marble mosque was the private mosque of the royal family. Zafar II used to visit his summer palace for hunting. He was also honored at this palace during the ecstatic Phool Walon Ki Sair festival. 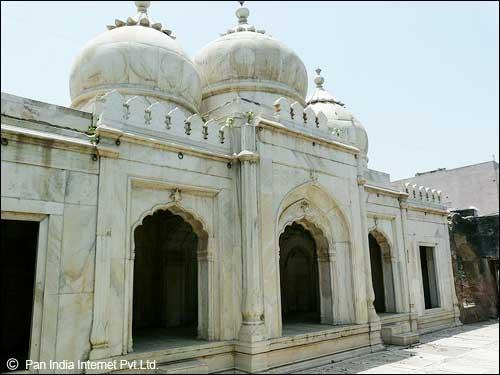 The grave of Adham Khan's mother and Akbar's wet nurse, Maham Anga was also placed here. The palace has also served as a police station, house during British rule.

The Jahaz Mahal was built during the Lodi dynasty to serve as a pleasure resort or inn. There are many stories debating about the purpose of its existence. According to one, it was built to provide accommodation to the pilgrims from Afghanistan, Iran, Iraq, Turkey, etc, who came to Delhi. 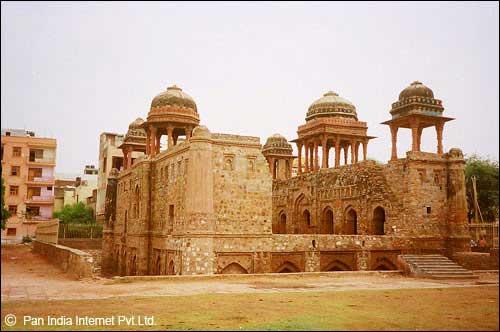