Majnu ka Tilla is a bustling and thriving Tibetan refugee colony located in North Delhi. It is situated between the Yamuna river and the Outer Ring Road.
It was established in 1960 when the Indian Government assigned land to the Tibetan refugees of the 1959 Tibetan uprising and has now become a stopping place for Tibetans and tourists alike.
A stone's throw from Delhi University, for years st 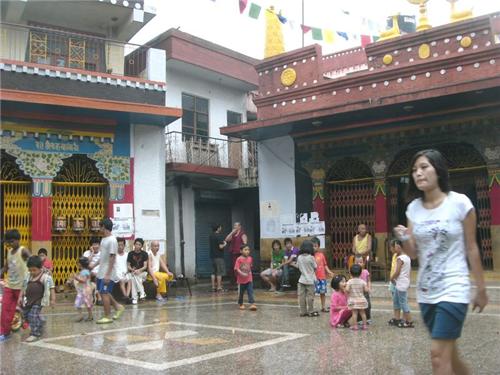 udents have made it a home from home munching on momos, noodles and other delicacies from the myriad of hawkers and restaurants.
In 1995, settlers were given notice that their homes were safe until the Tibetan dispute was settled. However, despite this, the colony was informed that demolishing would commence on the unauthorized colony.
In March 2013 the Government agreed to the camp being added to the list of regularised colonies in Delhi. Sheila Dixit officially named the area as Aruna Nagar and His Holiness Dalai Lama gave it the name Samyeling.
There is a Buddist Temple and a Monastery but one of the best known landmarks of the area is the Majnu ka Tilla Gurudwara, a white structured marble building on the GT road.The name arises from a Muslim hermit nicknamed Majnu (crazy) by the locals.
In 1505 he met Guru Nanak Dev ji who was impressed with Majnu who spent his time ferrying people across the river for free. Guru ji spent some time with Majnu and thereafter gave his blessings to Majnu.
Finding spiritual peace, Majnu became a devoted disciple of Guru ji and, as a reward, his name was immortalised.  The area became known as Majnu ka Tilla (hillock of Majnu).
The Tibetan market is another great tourist attraction.  It brings economy into the area and whilst walking through the narrow alleyways, you can hear all languages from Chinese, German, English, Hindi etc being spoken.
Tibetan gifts, prayer flags, prayer mats and traditional clothes. It is now a heady mix of spiritual teachings and commercialism. A mecca for those returning from or going to Dharamsalata, the area is full of spiritual teachers and monks.
Book shops selling the teachings of his Holiness the Dalai Lama in English. These book shops are bustling with both Tibetans and foreigners seeking enlightenment and by those also interested in Tibetan culture.
Hotels and guest houses are both cheap and plenty, but slightly more expensive than Paharhganj. Many restaurants have menus translated into Chinese.

How to Reach Majnu ka Tila