Inaugurated in the year 1986, for public worship and visits, the Lotus temple located in New Delhi, has since been drawing millions and millions of tourists from places around the world. Its visual magnificence has been the primary reason of attraction.
Surveys show that since its inception, Lotus Temple has had above 70 million visitors with an average of 8000 to 10,000 visitors daily. The temple is a beautifully sculpted design that is in the form of the lotus flower.
The teachings of Baha’i is preached and practiced here with prayer services held which is attended by devotees from around the world. The primary tenets of the Baha’i faith: oneness of God, oneness of Mankind and oneness have fascinated a huge population around the world.
Lotus temple which is the Bahai’i house of worship is one of the seven Baha’i Houses of Worship in Western Samoa, Australia, Uganda, Panama, Germany and USA.

Completed in the year 1986, the Lotus Temple straightaway received the title of Taj Mahal of the 20th 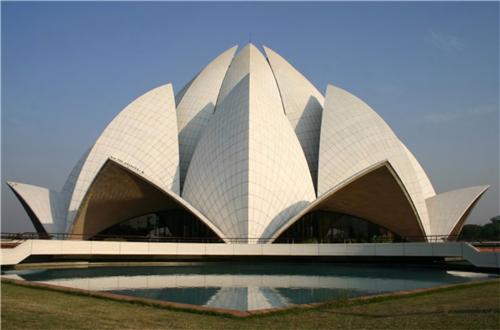 century by a journalist from United Kingdom.
The tenets of Lotus Temple celebrate the oneness of Mankind and human being’s love for God.
Lotus Temple, the Baha’i House of Worship has been described as “a dewdrop on the brow of eternity” since it celebrates the love of mankind. 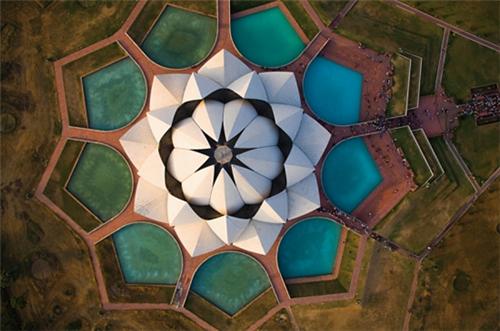 since its inception.
The temple is shaped in the form of a lotus and is primarily made up of marble, cement, dolomite and sand.
There is no restriction in the entry of visitors into the premises of the temple and it stays open for people of all religions and atheists too!
The place and the ambience around the temple is perfect for meditation and yoga in the midst of serenity. Delhi boasts of a wonderful place for relaxation through Lotus Temple.
The credit for the design and architecture for the temple goes to a Persian architect Fariborz Sahba who hails from Canada. When viewed from the top, the temple is an exact replica of a fully blossomed Lotus flower and the beauty is flawless.
The construction of the temple took a huge 10 years for completion, including above 800 technicians, engineers and workers in the process. There are a total of nine doors around the temple and it stands at a height of around 40 meters.
The main reason behind Baha’i House of Worship being designed in the shape of a lotus flower is that Lotus symbolizes peace, love and immortality which makes it an apt symbol for construction.

Remains open from Tuesday to Sunday (Mondays closed). There is no charge for admission.


How to reach Lotus Temple: