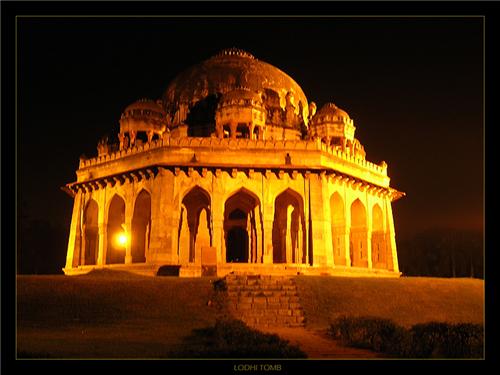 Originally known as Lady Willingdon Park, the Lodhi Tomb it is now referred as the Lodhi Garden and is outlined by tombs, Mosques and Bridges.
The Prominent Tombs at Lodhi Garden are that of Muhammad Shah, Sikandar Lodhi, Shish Gumbad and Bara Gumbad. Ibrahim Lodi was the last ruler of the Lodi dynasty.

The first ever tomb here was built in 1444 by Ala-u-din-Alam Shah for Mohammad Shah. The tomb belongs to the last ruler of Sayyid Dynasty and this structure happens to be one of the few examples of architecture of Sayyid Dynasty left because of which it requires careful preservation and therefore it is an important project for Archaeological Survey of India.

Next to Mohammad Shah’s tomb is Sikandar Lodi’s tomb and apart from the chhajjas it is quite similar to tomb of Mohammad Shah. Tomb of Sikandar Lodi was built by his son Ibrahim Lodi   in the year 1517. Later on Akbar used this place as an observatory and kept records in a library built by him.

During British Raj it was landscaped by Governor General Marquess of Willingdon’s Wife and therefore it was called ‘the Lady Willingdon Park’ (around 1936). After Independence this Garden was named Lodhi Garden because of the presence of Lodi Tombs.

After 2004 Archaeological Survey of India (ASI) and INTACH have been organizing heritage walks; they have also published a booklet that talks about the monuments, flora and fauna of the park. ASI has also granted the project on conservation and restoration of five monuments to INTACH and the first phase of the project was sponsored by Steel Authority of India (SAIL).

The most attractive site is the Bara Gumbad and the Sheesh Gumbad. Bara Gumbad meaning big dome is a gateway that connects a three domed mosque and it has a huge rubble-construct dome. Sheesh Gumbad is the glass dome and is called so because of the presence of glazed and glossy tiles.

The interesting story behind Sheesh Gumbad is that no one knows about the origins of the remains of this tomb and it was built when Sikandar Lodi was king. The Mohammad Shah tomb is known for the Octagonal chamber with Chhajjas or roof of stone and guldastas in the corner. Tomb of Sikandar Lodi is similar in architecture however there are no Chhajjas on the roof.

In the 16th century Lodhi Tomb unlike other tombs was the only garden tomb and therefore it was a rare piece of architecture. The walls of the tomb have Mughal Designs and many foreign languages have been inscribed there making it all the more unique and exceptional.

Lodi garden or the Lodi tomb is located near Khan Market and Lodi colony in south Delhi. It is beside India International Centre