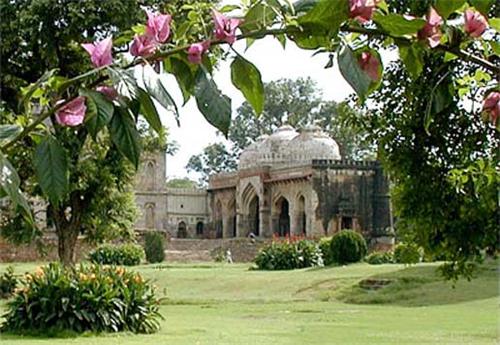 Lodhi Garden or Lodi Garden is one of the most beautiful and well maintained gardens in the capital city Delhi. Initially known as the Lady Willingdon Park, this park is a complete enchanter and is most popular among the joggers.
Built by the Sayyid, Lodis and rulers of Pashtun dynasty in the 15th and 16th centuries, this park was inaugurated in the year 1936 by British Raj and was re-designed by J.A Stein and Garrett Geckbo in the year 1968.
It houses architectural marvels like Mohammed Shah’s Tomb, Sikander Lodi’s Tomb, Bada Gumbad and Sheesh Gumbad.

Mohammed Shah’s Tomb: Mohammad Shah was the last ruler of the Sayyid dynasty and this tomb was built in 1944. It is an octagonal enclosed area with lintels and chattris made of stone and is an elaborate composition. The architecture consists of stone chhajjas at the roof of the tomb and guldastas  placed at the corner.
Sikander Lodi’s Tomb is quite similar in structure to the Mohammed Shah’s Tomb but has no stone chattris. It portrays the glory of the Lodi dynasty. The Sikander Lodi’s Tomb was built by the last Sultan of Lodi Dynasty – Ibrahim Lodi in the year 1517.
Bada Gumbad is a big rubble construction located in the centre and leads to a three domed mosque. Sheesh Mahal lies opposite to the Bada Gumbad and was also built by the Lodis. It takes around 1 to 2 hours to cover the entire length of the garden.

As the architectural pieces and remains from 15th and 16th Century is less in number and hardly preserved anywhere in the country, this itself speaks for the importance this place bears to the arts lovers and such a pleasing experience it provides to the daily morning and evening joggers.