Jawaharlal Nehru Stadium in New Delhi is an important sports complex  hosting a number of national and international sporting events such as football, and athletics.
It is ranked fourth in India and 51st largest in the world with a seating capacity of a whopping 60,000 spectators and 100,000 spectators for concerts.
It is also the headquarters of the Indian Olympic Association.

Jawaharlal Nehru Stadium, as the name suggests is named after Late Pt. Jawaharlal Nehru, the first prime minister of India. It was built in the year 1982 for hosting the 9th Asian Games by the government of India and has been the host of many international and national events since then.
It was renovated in the year 2010 for the Commonwealth Games which included a brand new Teflon coated roof, professional audio system, a synthetic warm up track along with a synthetic ball field and much more. The seating capacity was reduced to 60,000 from 78,000 after the renovation. 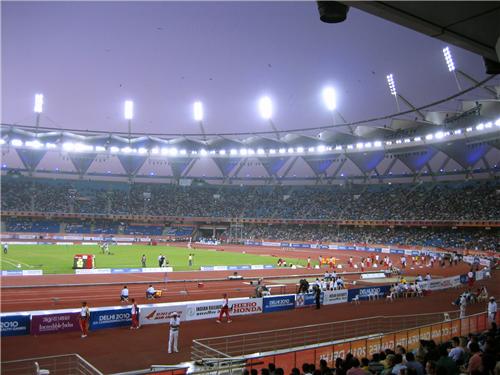 The stadium was the main venue for opening and closing ceremonies of the 9th Asian Games along with several events like football and athletics.

The stadium hosted the concert on 30th September, 1988 and featured Sting and Peter Gabriel along with E Street Band, Tracy Chapman, Youssef Dour and Ravi Shankar.

Jawaharlal Nehru Stadium was a proud host of the eighth Asian athletics championship which were organized in 1989 and India ended second in the medal tally with a total of 22 medals.

Major International events such as 2011 SAFF Cup and 2012 Nehru Cup were held in Jawaharlal Nehru Stadium. India beat Afghanistan by 4 – 0 in the SAFF Cup Finals.
Another memorable match was organized on 10th January 2012 between India and Bayern Munich, Germany’s frontrunner football club. This match was also the farewell match for famous Indian footballer Baichung Bhutia as Captain.

The stadium was the prime venue and hosted both opening and closing ceremonies of the much talked about commonwealth games, 2010. Various athletic events too were held in the stadium apart from the ceremonies.

The Stadium’s prime location makes it easily accessible by public and private transports. There are a number of DTC Buses, both AC and Non – AC from Kashmere Gate, Sarai Kale Khan and Anand Vihar, that can be used to reach the stadium.