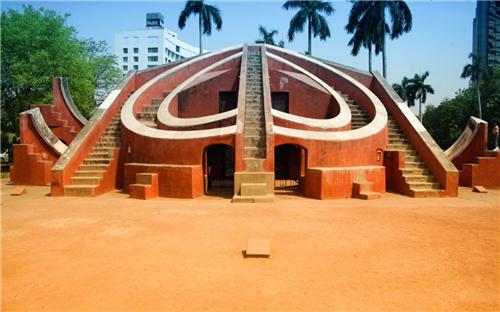 The Jantar Mantar is situated in the city of New Delhi. Jantar Mantar New Delhi is basically an astronomical lookout station which comprises of 13 architectural astronomy instruments.

The celestial observatory site is one among the five observatories constructed by Maharaja Jai Singh II of Jaipur, during 1720s, as he was committed to the task of making revisions in the calendar and astronomical data.

The epithet 'Jantar Mantar' is actually Sanskrit meaning Yantra (Jantar) stands for instruments and mantra stands for formula. Consequently, Jantar Mantar is a lookout station to carry out scientific observations at the time where forward-looking and accurately performing instruments were not introduced to the world.

The most common intention behind Jantar Mantar architecture as a lookout station was to accumulate precise astronomical data, and to forecast the motions of planets, sun and moon.  The Jantar Mantar was once an advancement in the field of astronomy but lost its purpose as an instrument station due to the construction of buildings all around the astronomical structure which blocks the operation for precise observations.
Some of the instruments present within the observatory are:

Mishra Yantra – Resembling the formation of a spade, this heart shaped structure is symbolic of Delhi. It was used to figure out noon in different cities across the world.

Samrat Yantra – It is the famous giant triangular sundial that rises to a height of 70 feet. It is an instrument that measures time accurately.

Jayprakash Yantra – One of the most captivating instruments, this yantra is actually a hollow hemisphere which reflects every point in the sky.
It is divided into two complimentary parts, which are further subdivided into six slabs. There are markings on its rims and one can go down the stairs for measurement.

Ram Yantra – Used to measure the altitude of stars, this structure consists of two cylindrical buildings containing radial lines that spread out from a center.

Open: All days of the week throughout the year


How to Reach Jantar Mantar Delhi