Masjid-i Jahan-Numa is a renowned Islamic shrine sited in the heart of Old Delhi which is popularly called Jama Masjid which means “The world reflecting mosque”. The name Jama Masjid refers to the congregation prayers that are held on every Friday at noon.

The mosque is sited on the Chawri Bazar road of Old Delhi opposite Red Fort and Taj Mahal. The mosque was built on 19th October 1656 AD by the great Mughal emperor Shah Jahan. The Emperor laid the foundation of the masjid on the Shahjahanabad hill rock. 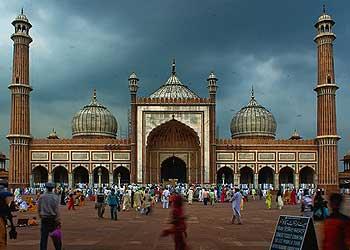 The mosque is a popular landmark in Old Delhi and attracts international tourists and devotees every year as it is the biggest mosque in India. Jama Masjid is an example of Mughal architectural style in India as it took 6 long years for its completion using 6000 laborers.

This priceless historic architecture is said to be worth a million rupees during the period of Shah Jahan. Close to the northern gate of the Masjid is a closet that stores many relics and an antique copy of the Holy Quran written on deerskin. Relics are the physical remains of great saints/rulers or their jewelry/weapons.

The three dome architecture of Jama Masjid is of 80 meters height and 27 meters width with four towers and three massive entry gates. The entry from the eastern end leads to the vault of Sultan Ahmed Shah. This high construction can be seen from anywhere within 5 km distance from the masjid.

The architectural style of the masjid is a mixture of Hindu and Islam styles of architecture. The mosque has two 41 meters height Minarets decorated with white marble and pure red stone stripes. Minaret means the lighthouse of the mosque from where devotees are called for Prayer. The minarets are shared into 3 galleries which are prevailed by 12 sided open vaulted pavilions.

The west chamber of Jama Masjid has 260 long pillars in it all of which are engraved as per Hindu and Jain custom. The floor plan of the Delhi Jama Masjid is the same as the Fatehpur Sikri Jama Masjid.

The courtyard of Jama Masjid is rectangular with 75 meters height & 66 meters width and it can be reached from the North, East, and South through 3 stairs of red stone steps. The north, south, and east massive gate entrance of Jama Masjid has 39, 33, and 35 steps respectively.

The masjid is built facing west direction and its three domes have alternate black and white marble bands with its topmost end filled with gold. Each dome of the masjid covers a big hall with seven curved entrances made of marble. White marble tablets are incorporated above each entrance which has writing in black marble. The masjid floor is fully covered with white and black marbles.

When to visit Jama masjid

Jama Masjid is a very popular tourist destination that attracts international tourists to its vicinity. It is open for public view for all seven days a week from 7 am till 12 pm and from 1.30 pm till 6.30 pm. Entry is free in Jama Masjid but outsiders or tourists are not allowed in Masjid premises during prayer hours.