ISKCON designed and constructed by Achyut Kanvinde is one of the largest temples in Delhi. It was built in 1998 by a sect known as "Hare Rama, Hare Krishna" also famous as “ISKCON" (International Society for Krishna Consciousness) which also specially made about 40 other ISKCON temples over the world (mostly in India).
It is also famously known as the Sri Sri Radha Parthasarathi Mandir, which is a considered to be Vaishnav Mandir of Lord Krishna and Radharani. If one wants to find peace and solace then this place is best. There are much more to learn, see and unwind in this beautiful temple The huge halls in the complex are used for administrative purposes that are divided into four different sections.
Its unique latticed towers a fusion of traditional design and modern possibilities will extend ninety-eight feet above the highest point on top of hill. This temple adorn carved stone, wood, and marble, which will  bring to life the classy artistry of ancient India in devotion to Lord Krishna. 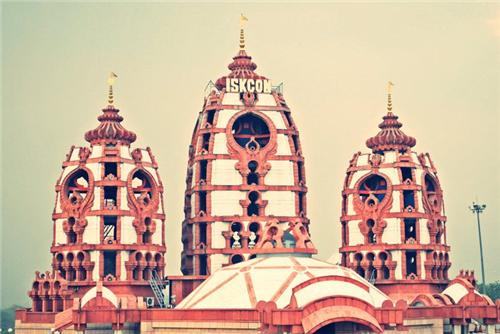 There is a central prayer chamber which is a huge room, extremely beautiful. The roof showcase painted triangular panels depicting the life & journey of Krishna. A white shining chandelier hangs from the center which was adding glory to the ceiling and was there to light up the paintings at night & endue them with a surreal glow.
One can see several visitors sitting cross-legged on the floor in peaceful way and reciting prayers & invocations, some are found clapping their hands with the beat. There are three chambers; each has a spacious niche in which are set large shelter, they were golden painted. The idols are covered in glittery clothes & jewellery & looking appealing sitting in their canopies.
The golden look of the canopy attract many visitors, one would have feeling of touching this glittering idols but a barricade separates these niches from the visitors & a large retinue of security men & women ensure that visitors did not touch or roll on these barriers.
Opposite of the sanctum sits a life-like idol of Swami Prabhupada, the pioneer of ISKCON group. The statue looks so real that it gives an impression that some guru is sitting and doing tapasya. All idols in this temple have been made by Russian sculptors, they have done magnificent job.

Temple priests offer 6 different aartis to the main deities on a daily basis, which include Mangala Aarti, Dhoop Aarti, Tulsi Aarti, Pushpa Aarti, Raj Bhoga Aarti, and Sandhya Aarti. On Special occasion of Janmashtami festival, temple organize special prayer and events  and is celebrated at a grand level at this ISKCON Temple.  There is also animatronics show which has three different screens, and where one can see how temple is formed and to spread Hare Krishna clan in many other countries.
The temple also plays a  show titled “Gita Saar” with the use of 3 specially designed hi-  tech robots. They are built to emulate Krishna, Arjuna & Swami Prabhupada, conveying the message of the Bhagvad Gita The show is created by using hi-end technology and is controlled by 3 computers networked together and connected to a remote control. This is one place, which has been successful in bringing together science and technology with religion. 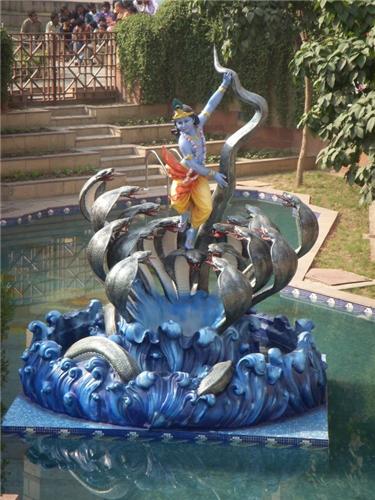 The open surroundings here are admirable. There are fountains all around.  One can find a very imposing statue of Lord Krishna dancing on the 7-headed serpent Kalia Naag within one of the fountains.
The bustling fountains & the greenery ensured it is nature friendly is binding its visitors to the environment as well. The prayer halls inside the temple are air-conditioned, for the devotees and visitors so that they do not feel uncomfortable in the itchy and humid summers, especially at the time of aarti (prayers organized 6 times/day) when the halls get crowded.

Like other temples, here too around the idols of the Gods & Goddesses space has been provided for parikrama (circumambulation). The whole path is adorned with attractive paintings depicting scenes from Krishna’s life & the Bhagvad Gita.
There are beautiful engraving made in marble of Lord Vishnu lying down with his four hands & the complete regalia. The temple is pretty modern in its decoration & is a beauty in itself, astonishing the visitors with its intricate artwork. The central hall is said to be able of housing 1,500 people with no difficulty and comfort.

One can buy spiritual books & other souvenir from a shop located just next to the media hall.ISKCON has thus appeared as a place loved by those who would want to take pleasure in good vegetarian food, beautiful architects, philosophers saying, artist work, and even tourists. ISKCON has everything to bind the visitors a library, extraordinary animatronics show, restaurant, and peaceful area to just sit calmly.
One can find vegetarian restaurant Govinda where one can relish Sandwiches and Samosas washed down with a cool glass of Lassi. In addition, they are also serving buffet meals cost at Rs. 330/person.

Take your pick and venture into a place that has lots to say, for those who want to hear. One should visit the ISKCON Temple at least once, to admire the beautiful stone carvings architect, painting & idols. The environment of the temple & the graceful sanctum are praiseworthy & worth seeing.