If you are in Delhi and have not visited India Gate, then your Delhi yatra would surely be considered incomplete. A candle light vigil or the evergreen boating.
The late night ice cream or the most famous choice for family picnics, India Gate has become an indispensable part of Delhi.  After all it is the national monument of our county. 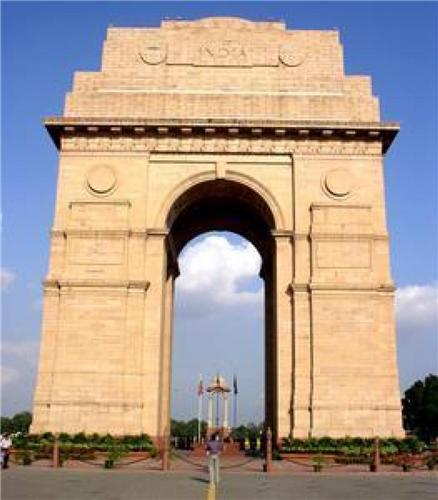 India Gate, an “Arc-de-Triomphe” stands tall at 42m at the centre of the cross road as a proud archway. It tells the story of courage and bravery of more than 70,000soldiers who lost their lives while battling the British Army during the World War 1.
The foundation stone was laid by His Royal Highness, the Duke of Connaught in 1921 and it was designed by Edwin Lutyens, the architect who was man behind the plan of Delhi.
The monument stands on a stone base which is made up of red Bharatpur stone.

Let’s talk about the history and the significance of the monument in detail. Established in 1921 and unveiled in 1933, the monument also bears the names of more than 13,000 British and Indian soldiers killed in the Northwest Frontier during the Afghan War of 1919.
After the Indian independence, it became the coveted place for the Indian Army’s Tomb of the Unknown Soldier, popularly known as the Amar Jawan Jyoti or the flame of the immortal warrior. A flame burns eternally, day and night, under the arch of the monument in remembrance of the soldiers who laid their lives for saving the nation in the Indo-Pak War of 1971. The monument is such an integral part of Delhi that whenever you think of Delhi, India Gate is always the first thing that strikes your mind.
The republic day parade which starts from the Rashtrapati Bhavan (the president’s house) also passes through India Gate. Be it the boating or the greenery, India Gate has something for everyone.The lush green lawns, boating and the open sky add to the overall experience.

How to Reach Rashtrapati Bhavan

Located near Rajpath, India Gate is certainly the most popular and the most visited monuments of Delhi. It is easily approachable by public transport, the nearest metro station being Pragati Maidan. It is open on all days, morning to night and there is no admission fee. It is one of the must visit monuments of India. It is surrounded by lush green lawns making it the most preferred place for a picnic. India Gate is a perfect getaway for people of all ages.
Read More National Zoological Park in Delhi, Yoga Centers in Delhi, Yashwant Place, Yamuna River in Delhi, NGOs for Women in Delhi, Wine Shops in Delhi, Wildlife Sanctuaries Near Delhi, Wholesale Markets in Delhi, Map of West Delhi District,Volvo Bus Service from Delhi, Delhi Online, Vintage Camera Museum Delhi, Foundation of Shanti Stupa Delhi, History of Digambar Jain Mandir Delhi, List of Bank Branches in Delhi, Economic System of Delhi, Banquet Halls in Delhi, Big Bazaar Delhi, Catering Services in Delhi, Apollo Hospital Delhi, National Childrens Museum New Delhi