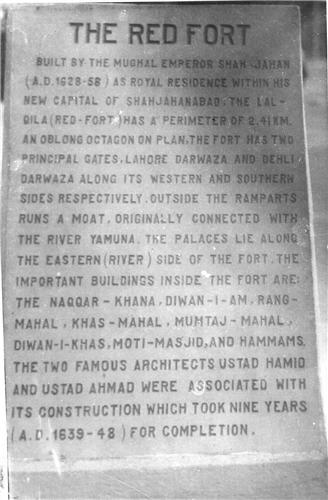 Mughal Ruler Shah Jahan shifted his capital from Agra to Delhi in 1639. On 16th April, 1639, he laid the foundation for Lal Qila in Shahjahanabad, the seventh city of Delhi (present day Old Delhi). This fort referred to as Lal Qila, became the residential complex of the royal family.
There were fourteen gates with Mori gate, Kashmiri gate, Ajmeri gate, Lahori gate (on the west), Delhi gate (on the south) and Turkman gate as the important ones.
Lal Qila was situated at the town's northern end. Near the wall on north-eastern side, stands the Salimgarh fort which was built in 1546. The administrative and financial condition of Mughals deteriorated after Aurangzeb. The fort witnessed degeneration during the 18th century.
Jalandhar Shah took over the Red Fort in 1712, the palace had been without an emperor for 30 years. However, he was murdered and Farukhsiyar took the reins of the kingdom. In 1719, Muhammad Shah, also called ''Rangila'' due to his interest in arts, took over Lal Qila.
Persian emperor Nadir Shah attacked the Mughals in 1739 and defeated them. This was when Nadir Shah resorted to destruction in the Red Fort and also took away the much  acclaimed Peacock Throne.
He left to Persia after three months leaving a weak Mughal empire in the hands of Muhammad Shah. Mughals were reduced to titular heads in Delhi. A treaty signed in 1752 made Marathas the protector of the throne at Delhi. Post 1752 treaty, Marathas became the guardians of the Mughal regime in and around Delhi. Their conquest of Lahore and Peshawar resulted in their conflict with Ahmad Shah Durrani.
The Marathas generated funds for their army of soldiers by taking out and melting the gorgeous silver ceiling adorning the Diwan-i-Khas.  This was needed to protect Delhi from invasion by Ahmed Shah Durrani. But when they were defeated in the Third Battle of Panipat, Ahmed Shah Durrani raided Delhi in 1761.
With the support of Marathas, Shah Alam ascended the throne in Delhi in 1771. In 1783, Sikh Misl Karorisinghia led by Bhagel Singh Dhaliwal conquered the Red Fort.  During the Second Anglo-Maratha War in 1803, British East India Company defeated the Marathas in the Battle of Delhi, and thus ended Maratha rule in Delhi and on Red Fort. The administration of Mughal territories passed into the hands of the British.
After the failure of rebellion against the British in 1857, Bahadur Shah Zafar left the fort only to return as a prisoner of British for his trial in 1858 in his very own hall Diwan-i-Khas. He was exiled to Rangoon on 7th October, 1858 at the ripe age of 82 years. And thus the royal saga of Mughal reign ended. The British officially consented for the removal and selling of valuables from the Lal Qila complex.
The gardens filled up around the year 1863. Lal Qila was converted from a decorated paradise to a military base. A part of the fort remained under control of Indian Army till 22nd  December,2003 after which it was rightfully handed over to Archaeological Survey of India (ASI) for restoration and preservation.
ASI comes under Ministry of Culture and is concerned with archaeological researches and preservation of cultural heritage in India.

The Lal Qila is spread in a total area of 92.6 hectares. It is classified as a cultural property. Red Fort and Salimgarh fort make for the core zone while the immediate surroundings of Lal Qila and Salimgarh fort measuring around 40 hectares are the buffer zone. Salimgarh fort was built by Islam Shah Suri in 1546 AD and was an important focal point of Shahjahanabad. So, the Red fort heritage site constitutes the Lal Qila and Salimgarh fort, both.
The inscription to the World Heritage list is significant as it places an international obligation on ASI (management authority of the fort) to protect, manage and prevent any further damage to the fort complex.  ASI has come up with a Comprehensive Conservation Management Plan which lays down the methodology that ought to be adopted for close dialogue between departments and agencies which are connected with the upkeep of this ''ancient and historical monument''.

Inside the palaces, rectangular plaques of black marble are embedded with exclusive stones. This technique is known as Pietra Dura. Most of these panels depicted single bird and floral motifs.
The marble plaques were imported from Italy. The Mughal architecture was evident in white marble which were inlaid with precious stones forming beautiful designs of flowers and birds.
Orpheus playing his lute, peaceful wild animals seated before him, birds, lions and flowers symbolized the throne of Solomon which is regarded as ideal model of just Islamic kinship.
Red sandstone has been used for constructing walls of the fort. The palaces were made of white marble. The stucco technique was a special feature of Mughal architecture. The walls were plastered with lime such that a three dimensional effect was created.

The major attraction in Lal Qila is the light and sound show in the evenings. The streams have dried and the carved panels in the palaces do not show off the studded rubies and diamonds, but nonetheless, you will still feel the royalty and magical regal atmosphere brush up with you.
Visitors are not allowed to enter the mosque and hammam. Today, there is arrangement for the convenience of tourists with restaurants, toilets , retail malls, jewellery stores and craft item shops inside the fort premises. A number of museums are there for you to visit. These include Indian War Memorial museum, Archaeological Museum and still another which showcases stories of martyrdom of soldiers in the 20th century.
The eve of Independence day sees tight security in and around the fort complex. The arial space around Lal Qila becomes no-fly zone and safe houses are marked to prepare for any emergency. On 22nd December, 2000, Lal Qila was attacked by terrorists of Lashkar-e-Toiba which was an attempt to derail peace talks between India and Pakistan.
Read More: Aadhar Cards in Delhi, Adventure Island in Rohini, Agrasen Ki Baoli, Ambulance Services in Delhi, Delhi Ka Airport, Akshardham Temple Delhi, AIIMS Hospital in Delhi, Anand Vihar ISBT Delhi, Indian Air Force Museum, Bal Bhawan Delhi, Bal Bhawan Delhi , Best Golgappa Joints in Delhi, CGHS approved Hospital in Delhi, Bars in Delhi, Foreign Exchange Offices in Delhi, Commonwealth Games in Delhi