This place is considered to withhold the old essence of Delhi which every tourist must pay homage to Nizamuddin Dargah or the holy tomb of Hazrat Nizamuddin’s tomb. Located in Nizamuddin bazaar of Nizamuddin West area in Old Delhi. 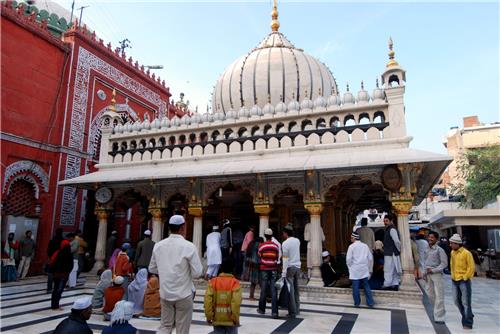 A sacred shrine for the Muslims of Delhi and its neighborhood, Nizamuddin Dargah nestled between Humayun’s Tomb and Hazrat Nizamuddin Railway Station sees visitors from other religious communities like Hindus, Christians and many more. Hazrat Nizamuddin Auliya, the greatest of Sufi saints from the Chisti order (1238-1325) preaching love and humanity is entombed here. He was born in Badaun district of Uttar Pradesh and became a devout disciple of Sufi saint Baba Farid.
Notable personalities like Mughal Princess Jehan Ara (daughter of Mughal emperor Shah Jahan), esteemed Indo-Persian  poet Amir Khusro (disciple of Nizamuddin), Abul Fazl- the historian of Emperor Akbar are all entombed very close to Nizamuddin Dargah. So renowned and sacred is the influence of Hazrat Nizamuddin Auliya that the area is named after him. 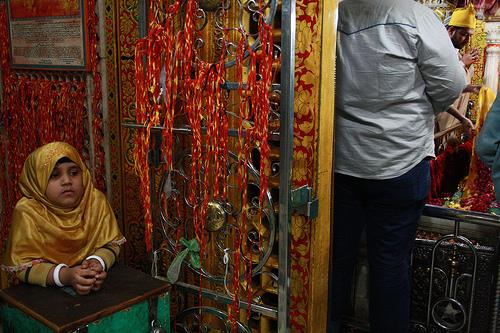 Cenotaphs of noted personalities like Mirza Ghalib’s tomb, Sabz Buri (Blue Gumbad), Chaunsath Khamba, Barkhamba, Lal Mahal is clustered around Nizamuddin Circle. Upon entering the premises of Hazrat Nizamuddin’s tomb, visitors and devotees will notice decorative grilles and latticework on them in the form of jaalis, courtyards, marble arches which impart a mystic aura to the area.
Devotees tie sacred red threads on the grills as they believe that their wishes will come true along with their prayers on the holy ground. The tomb or shrine is a sight to behold enshrouded in perfumed green fabric whereupon entering the devotees offer their reverence to the saint with rose petals and incense sticks.
Every Thursday special Qawwali performance is organized on the Dargah grounds at 7:00 pm in the evening and the complex comes alive decked up in ornamental lights to the soulful tunes and melody belted out by Qawwal singers who sing hymns in praise of the saint.
‘Urs’ (wedding) and death anniversary of the Sufi saint is celebrated inside Nizamuddin Dargah with great fanfare every year. The step well inside the Dargah complex is an architectural marvel and is well maintained.
The nearest metro station is JLN Metro Station and the best time to visit the Dargah is between 6:00 pm and 7:30 pm in the evening although it can be visited throughout the day 24x7. Do not forget to dig in to some lazeez kebabs famous in this area while on a trip to the saint’s tomb.
Read More: Aadhar Cards in Delhi, Adventure Island in Rohini, Agrasen Ki Baoli, Ambulance Services in Delhi, Delhi Ka Airport, Akshardham Temple Delhi, AIIMS Hospital in Delhi, Anand Vihar ISBT Delhi, Indian Air Force Museum, Bal Bhawan Delhi, Bal Bhawan Delhi , Best Golgappa Joints in Delhi, CGHS approved Hospital in Delhi, Bars in Delhi, Foreign Exchange Offices in Delhi, Commonwealth Games in Delhi