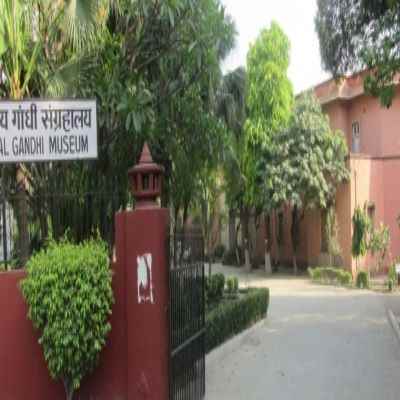 The nearest metro station of Gandhi Museum is Udyog Bhawan. You  can take a bus or auto from here and reach the museum which is just a kilometre away.

After the assassination of Mahatma Gandhi by Nathuram Godse on 30th January, 1948, all his manuscripts, books, personal items, newspapers, photographs, audio-visual records were gradually collected.
The museum opened in Mumbai and was later moved to building near Kota House in New Delhi. In 1957 it moved to a mansion at 5, Mansingh road, Delhi, which functioned as a museum till 1959 when finally the museum was opened near Rajghat in New Delhi.  The two-storey museum was inaugurated in 1961 by the then President of India, Shri Rajendra Prasad on 30th January, 1961.

Donations and Contributions are accepted which are entitled to tax exemption under Section 80G(5)(VI) of the Income Tax Act, 1961. National Gandhi Museum Official Site: Click Here

Did you know that the museum library houses 35,000 documents and books along with 2,000 periodicals in Hindi and English languages! Cards, CD's and posters can be bought from here. Also, you can listen to recorded speeches of Gandhi on audio and video tapes.
Time: 9.30 A.M.to 5.30 P.M.
Closed: Monday and Gazetted Holidays and 2nd Sunday of the month.

Special activities include film shows on Mahatma Gandhi and his contemporaries, exhibitions, seminars and conferences on myriad  topics. There is a huge collection of books and documents on ''Freedom Movement in India (1757 to 1947)'' and Mahatma Gandhi, along with plethora of books in the ''General Section'' as well.
Here you can find books on Humanities, Nature cure, Social Sciences and Literature. What's more, you will witness letters, notes and telegrams written by Mahatma Gandhi himself! There are 2,000 bound volumes of periodicals which incorporate those which have been written or edited by Mahatma Gandhi.
To mention a few of them: 'Harijan', 'Harijan Bandhu' (in Gujarati), 'Navjivan', 'Gandhi Marg', 'Khadi Gramudyog', 'Young India', 'Visva-Bharti Quaterly', 'Aryan Path' etc. are available in this library. Library members can borrow two books at a time. Permission of the Director is required to delve deep into books kept in the Reference Section. Internet facility is available and copies of extracts from books can be requested.

This section in Gandhi Museum comprises of rare photographs of Gandhi, his wife Kasturba and Freedom Movement of India.
You can order photographs of any size for personal collection, from cabinet to wall size! And many years after, you will be reminded about your trip with these gems you take along!

Here you can lay hands on a wonderful collection of CDs, DVDs, audio-visual tapes and films on Freedom Movement and Mahatma Gandhi.  From patriotic songs in many different Indian languages to bhajans most liked by Gandhiji. From speeches of Nehru and Subhash Chandra Bose to around 140 video films on Gandhi, your enigma and curiosity are fuelled to the hilt!
This museum boasts of a 75-seat auditorium. Saturdays and Sundays (4.00 P.M. to 5.00 P.M.) are reserved for free film shows for one and all.

Gandhi Literature centre is the sales section of the museum. For those who love to buy and take home something as a remembrance of their visit, this is the ideal place. There are framed photos, pens, key rings, audio and video CDs, related to Mahatma Gandhi. You can directly buy the items across the counter or even give bulk orders to be dispatched in India or abroad.
Also, books published by Gandhi Peace Foundation, Bhartiya Vidya Bhavan, Ramakrishna Mission, Children's Book Trust and many other India as well as foreign publications find mention in the catalogue here. There are special exhibitions in the months of February-March and October-November every year.
Read More: Amusement Parks In Delhi, Aadhar Cards in Delhi, Adventure Island in Rohini, Agrasen Ki Baoli, Ambulance Services in Delhi, Delhi Ka Airport, Akshardham Temple Delhi, AIIMS Hospital in Delhi, Anand Vihar ISBT Delhi, Indian Air Force Museum, Bal Bhawan Delhi, Bal Bhawan Delhi , Best Golgappa Joints in Delhi, CGHS approved Hospital in Delhi, Bars in Delhi, Foreign Exchange Offices in Delhi, Commonwealth Games in Delhi