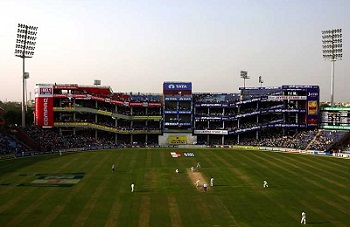 Feroz Shah Kotla Stadium, Delhi is reckoned to be one of the most prestigious international cricket grounds in the world.

Especially, for Indians, Feroz Shah Kotla is a memorable cricket ground as the former spin spearhead of India, Anil Kumble created a singular record of taking 10 wickets against Pakistan during the year1998/99. The stadium has a seating capacity of 30,000 to 60,000.

The international cricket ground is owned and maintained by the DDCA or Delhi District Cricket Association. After the inauguration of Indian Premier League in 2008, the Feroz Shah Kotla Stadium has been the home ground of the Delhi DareDevils (cricket franchise representing the city of Delhi) of the IPL.

As an international cricket venue, Feroz Shah Kotla Stadium has followed through numerous world records. A few of them are mentioned below:
Hemu Adhikari and Ghulam Ahmed created a world record for tenth wicket partnership with 109 runs.
Srinivasaraghavan Venkataraghavan debuted in international cricket and stunned New Zealand taking 12 wickets and led the team to a comfortable win.
Erapalli Prasanna and Bishen Singh Bedi together picked 18 wickets, which led the team India to a famous victory over mighty Aussies.
John Kenneth Lever had one of the best debuts as he scored a half century and had a bowling figure of 10 for 70.
Geoff Boycott smashed the world record test aggregate of Sir Garfield St Aubrun Sobers.
Sunil Gavaskar scored his 29th test century in just 94 balls equalling Don Bradman’s world record.
Anil Kumble had bowling figures of 10 for 74 in the fourth innings and became the second person to take 10 wickets in an innings after Jim Laker.
Sachin Tendulkar scored his 35th test century, exceeding Sunil Gavaskar's record of 34 test centuries.

The Feroz Shah Kotla Stadium is looked at as the team India's most successful test venue in terms of triumphs as India recorded seven consecutive test match wins during the period of 1993-2007.