Drama is a form of entertainment, where we laugh and shed tears along with the performers. It expresses the mode of fiction mirrored in performance. It can be in the form of stage shows, theater, plays etc. In today's generation most of  these forms of entertainment are taken in a different direction. It now creates awareness about political, social and cultural evilness of a country. There are many classes which can offer you this art of entertaining the public in many style and form. Unaffected by any foreign influence, India  is one of the few countries  which can bluster its indigenous drama. Bharta or Bhasa is the "founder" or "father" of Indian drama.

Indian Drama is the exhibition of unjust  zeal of love which is not considered as staid or aesthetically acceptable; nor ornate  expressions of hate, jealousy, or anger--in fact, nothing sensational or vicious. There are also stock figures, such as the polished courtesan, the jester, the down to earth confidant and friend of the hero. There are also stock comic situations as well as other devices of the stage that are   well known and as popular in India as elsewhere.

With the upcoming years, there has been an increasing demand for these classes- National School of Drama is one of the most renown in India and Delhi.

The national School of Drama is one of the chief theatre  training school in the world and the one kind in India. Sangeet Natak Akademi  set up this theatre as one of its constituent units in 1959. It became an independent entity and was registered as an autonomous organization under the Societies Registration Act XXI of 1860, fully financed by the Ministry of Culture, Government of India in 1975. This school  covers every aspect of theory which is done practically. It's a three year  programme. This theatre covers syllabus of all forms of drama and practical performance experience --from  Sanskrit Drama, Traditional Indian drama, Modern Indian drama, Asian Drama and Western Drama which will give the students a solid grounding in the art of theatre. Besides its  3 year  training programme, the school has started new vistas in the areas of children’s theatre and workshops. 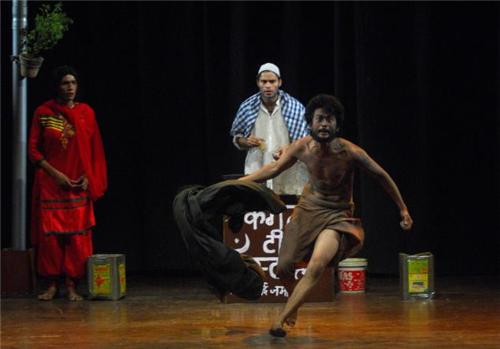 The School has two performing wings –

The Repertory Company and Theatre-in-Education Company

The Repertory Company began in 1964 with four artistes - Ms. Meena Williams, Shri Ramamurthy, Ms. Sudha Shivpuri and Shri Om Shivpuri -with the objective of training the students to master the field of theatre professionally. The second performing wing the-  ‘Theatre-In-Education Company’ (Sanskar Rang Toli) was established in October 16, 1989, and is one of the most important theatre education resource centres in the country.

Apart from these two wing the school also extensive Programme, a publication section and a literary forum named Shruti.The Publication Unit of the National School of Drama publishes book,  arranging for the translation of important books on theatre from English into Hindi and bringing out other important books on theatre. It organises festivals, events, exhibitions for awareness.

Comments / Discussion Board - Drama in Delhi