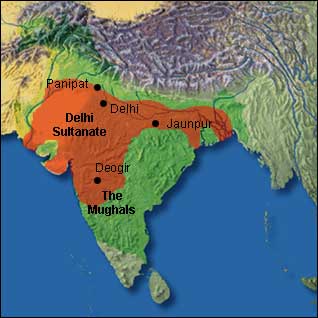 The reign of Sultans or Muslim rulers essentially started in Delhi with the defeat of Prithviraj Chauhan in 1206.
This was when Shahabuddin Muhammad Ghori became the first Sultan of India. Subsequently, Sultans of  Mamluk dynasty,   Khilji dynasty,   Tughlaq dynasty, Sayyid dynasty and  Lodi dynasty ruled the northern states of India including Delhi. This period of Sultan rulers continued in India till 1526.

History and Rulers of Delhi Sultanate

Muhammad Ghori set the first Muslim rule in India with the invasion of Multans and later Mamluk Gujarat, Peshawar and Lahore. Qutub-ud-din Aibak was a slave general of Ghori and his reign marked the start of Mamluk dynasty.
Qutub-ud-din Aibak started constructing Qutub Minar which was later completed by his successor Iltutmish. Iltutmish fought and came out with a successful capture of Mundawar, Malwa and Ujjain.
He was followed by Razia Sultana who was later killed by nobles and Balban succeeded her. Balban’s strong rule checked Mongol attacks but after Balban’s death Mamluk Dynasty saw the end.

Khilji Dynasty was brought into rule by Jalal-ud-din Feroz Shah Khalji after dethroning grandson of Balban. Ala-ud-din Khalji killed Jalal-ud-din and established his rule.
He conquered Gujarat, Ranthanbhor, Mewar, and Deccan and took his expedition till the south India. Khusrau Malik was the last Khilji ruler who was dethroned and overpowered by Tuglaqs.

Muhammad bin Tughluq and Firoz Shah Tughlaq were powerful Sultans of Tuglaq dynasty. They stretched the boundaries from Peshawar till Assam and Madurai. The empire disintegrated during Tuglaq rule and during the time Nasar-ud-din Mohamed Tughluq' attained the throne, Mongols captured Delhi.

In 1414, Khilzi Khan Sayyid became the ruler till Ibrahim Lodi captured Delhi.  Ibrahim Lodi was defeated by Babur rooted the Mughal Rule in Delhi. After the fall of Mughal rule the Sultanate rules came to the end in Delhi.

Art and Architecture of Delhi Sultanate 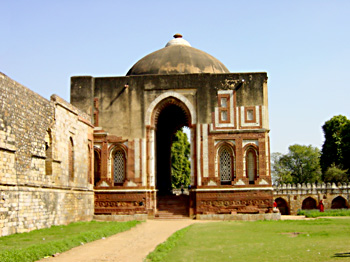 Since the Delhi Sultans arrived from Persia and Central Asia, their architecture had a great influence from Afghans and Turks. The period is essentially a phase of assimilation of Indo-Islamic architecture. Domes, minarets and arches were a common feature of these Madrasas and Mausoleums.
Most of the constructions are done using concrete and mortar, which was never used by the local craftsmen before. The monuments of these sultans also demonstrate symmetry, beautiful carvings, fine calligraphy and ornaments.
Entrance arch of the central chamber featured in a few of these monuments came to be used after Khilji period. Blue-enamelled tiles, the lotus-motif started were used from Saiyyad period and became a regular feature thereafter.
Lodis used enameled tiles, which was a technique introduced from Persia.  Ali Darwaza, Jamia Masjid Ferozeshah’s tomb and Tughluqabad town are a few good examples of Sultanate Architecture.
These structures were built by Hindu craftsmen. Amongst all, Qutab Minar was one of the early and finest architectures of this period.
Read More: Amusement Parks In Delhi, Aadhar Cards in Delhi, Adventure Island in Rohini, Agrasen Ki Baoli, Ambulance Services in Delhi, Delhi Ka Airport, Akshardham Temple Delhi, AIIMS Hospital in Delhi, Anand Vihar ISBT Delhi, Indian Air Force Museum, Bal Bhawan Delhi, Bal Bhawan Delhi , Best Golgappa Joints in Delhi, CGHS approved Hospital in Delhi, Bars in Delhi, Foreign Exchange Offices in Delhi, Commonwealth Games in Delhi,

Explore more about History of Delhi