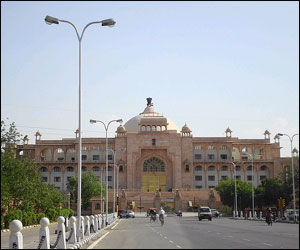 The Legislative Assembly of Delhi or the Vidhan Sabha is a law making body. The set up of the Legislative Assembly consists of the Speaker, Deputy Speaker, and Secretary to Honorable Speaker, Secretary to Deputy Speaker, Secretary Legislative Assembly and several other members.
The Legislative Assembly is unicameral in nature. It consists of 70 Members. 13 seats in the Legislative Assembly are reserved for the scheduled caste.
There are 7 ministers in the Delhi Cabinet. The Legislative Assembly has a term of five years. The Assembly is a privileged body. The members here have all the functions and powers availed by the members of Parliament. The members of the body are also eligible to vote in the election of the President of India.
The Chief Minister is the head of the government and is vested with executive powers. The Chief Minister is appointed by the Governor and on his advice the President appoints the other ministers. In accordance with his Council the Chief Minister advises and helps the Lieutenant Governor in his duties for matters that the Legislative Assembly can make laws.
The legislative control of Delhi had been mostly under the Indian National Congress. After the re-establishment of Legislative Council in 1993 the second major political party Bhartiya Janta Party came to power, but could not maintain its line up in elections that took place in 1998.
During the 1998 elections the Congress government came into power and after that in two more successive assembly elections Congress party held its control on elections under the leadership of Sheila Dixit making her Chief Minister for third time and giving three consecutive wins to Congress and its alliance UPA (United Progressive Alliance).
However, Shri Arvind Kejrival, leader of Aam Aadmi Party (AAP) was elected as the chief minister in the last Assembly elections held in 2013.  But the new government stayed in power only for 49 days as Kejriwal resigned in February 2014.
Fresh elections were again conducted on February 7, 2015. Aam Admi Party (AAP) led by Arvind Kejriwal won the 2015 Delhi Assembly Elections winning 67 of the 70 assembly seats. Delhi got its new government on February 16, 2020 when Shri Arvind Kejriwal was sworn in as the eighth Chief Minister of Delhi.
In 2020 Delhi Legislative Assembly election, the Aam Aadmi Party, led by Arvind Kejriwal won 62 seats to claim an absolute majority in the elections. The Bharatiya Janata Party won 08 seats while Congress even failed to open its account.

Gopal Rai
Gopal Rai is the Minister for Environment, Forest & Wildlife, Development and General Administration in Government of Delhi

Imran Hussain
He represents the Ballimaran constituency of New Delhi

Kailash Gahlot
Transport & Environment minister of Delhi and a member of the Sixth Legislative Assembly of Delhi in India.