Shankar’s International Dolls Museum or Delhi Dolls Museum was founded by a cartoonist K. Shankar Pillai.  Occupied in the floor area of 5184.5 sq. feet, of Children's Book Trust building, Bahdur Shah Zafar Marg, the museum displays costume dolls from all across the world.  The museum was set up in 1957 and ready by 1965. Inaugurated by Dr. S. Radhakrishnan, the museum owes fine collection of dolls from world but the majority of dolls of India occupy the frame here. 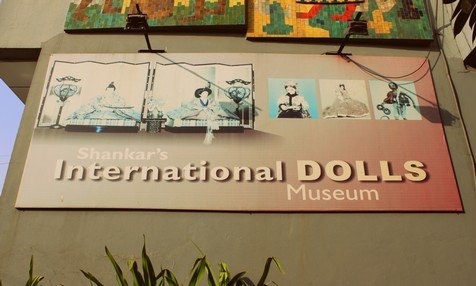 How it all started?

K. Shankar got an apple cheeked doll from Hungarian ambassador, and the cartoonist so liked the doll that he started gathering dolls from the places he visited. His fascination was such that he collected and exhibited his collection of 500 dolls after a few years. To preserve his collection a part of CBT building was entrusted to Shankar to promote this as a museum, where 6000 more dolls from 85 countries were added to the collection.

The two sections of the museum showcases dolls from European countries, U.K., U.S.A, Australia, New Zealand in one part, and dolls from Asian countries, the Middle East, Africa and India in the other section.
The museum started with a collection of 1000 dolls with an exhibit from many countries. You can find dolls bifurcated into several colorful themes like Dance of India, Brides of India, Man and Woman of India etc.
The major attraction of International Dolls Museum Delhi includes a Kathakali doll with its lavish costume, dolls from Japan, dolls of the Queen's collection, dance dolls from Hungary and Samurai.  The dolls crafted here have won first prize in 1980 at Golden Peacock Feather at the Dolls Biennale held in Cracow, Poland. These dolls interpret a great deal about facial features, accessories and lifestyles of people from different parts of the world.

One can see the dolls being made by craftsmen in the workshop. The dolls are designed with a lot of thought and careful crafting keeping in view the attributes, dressing style, culture and tradition of the region chosen.  Summer season sees a lot of visits from school children due to long vacations. Hence there are a lot of activities organized for children during this time.
UN Secretary General, Madame Tito of Yugoslavia, the sister of Shah of Iran, Queen Frederika from Greece, the wives of the President of Mexico and Indonesia, the Prime Ministers of Poland and South Korea are a few delegates who have visited the museum and appreciated  the worth of museum with their accolades.


Where is Doll Museum in Delhi