Bengali Market is a cultural hub and is one of the most popular and the oldest markets in Delhi. The market was also previously known as Bengali Mal Market and it was built by a Bengali named Mal Lohia in the year 1930. 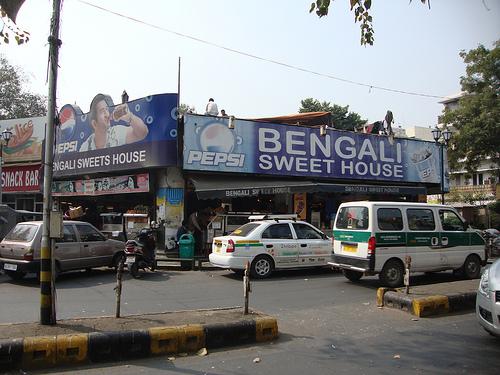 The Bengali market is a small market and it comprises of several stores. The market lies nearby the Tansen Marg in Connaught Place. It is extremely popular for the delectable Bengali sweets and the North Indian street food that can be had here.
An upscale market, which exclusively caters to the ultimate foodies. This can happen only in a city as vibrant as Delhi. Nathu's Sweets and Bengali Sweet House are the two prominent shops one can find here. Relish the soft Bengali rasgulla of the sweet shops present here which is the best, authentic Bengali rasgulla you can find anywhere in Delhi. One can have other famous Bengali sweets also.

Le Meridien Hotel and Janpath Hotel is at a stone’s throw from the market. Some of the cultural centers nearby are Bharatiya Kala Kendra, Kamani Auditorium, and Ravindra Bhawan. New Delhi Railway Station is 1km from Bengali Market and Chandni Chowk  is 3 km from the market. Costa Coffee outlet can prove to be a good place to relax and savor the one of the world's best coffee.

Fresh fruits and flowers are another thing this market has to offer. The market also comprises of some good photo studios, apart from general merchant stores, bakeries, dry cleaning shops, book shops, etc.

Explore more about Shopping in Delhi