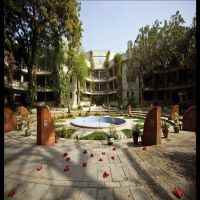 Aurobindo Ashram was initially inaugurated in Pondicherry as an ashram that would work for the betterment of the society. Gradually, the ashram made its work fully appreciated and applauded and extended to north India- Delhi which is actually as an extension of the sadhana centre at Pondicherry.

The primary motto of Aurobindo Ashram is to make ‘yoga’ a very integral part of human life.
Sri Aurobindo was a man of principles, who quoted: “All life is yoga”.  He was of the opinion that in life the smallest of details need to be divinized. The primary objective of yoga according to Aurobindo is self-perfection and world perfection

Aurobindo Ashram, of Delhi was officially inaugurated in the year 1956, 12th February with blessings 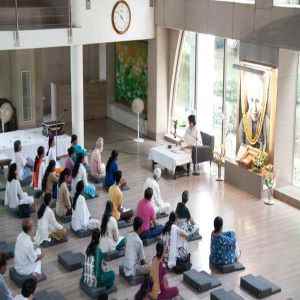 of the Mother.  The Ashram has a shrine and a meditation hall, which continues to be the main centre of all activities here where principles and teachings are preached of Sri Aurobindo and the Mother.
The ashram is a place for serenity which helps people to attain a higher life with a nobler and humbler aim in life. People come here to manifest their thoughts into proper physical expressions and life movements.


" A new light has appeared upon earth. Let this new school opened today be guided by it."
The school was later renamed " The Mother's International School ".  The Ashram has its own tenets and principles with no discrimination between sex, caste and creed. All souls are looked upon as the children of the Mother.  In the year 1957, the Mother granted that the first sacred relics of Sri Aurobindo to be taken outside Pondicherry, which were later installed in the shrine at Delhi Ashram. 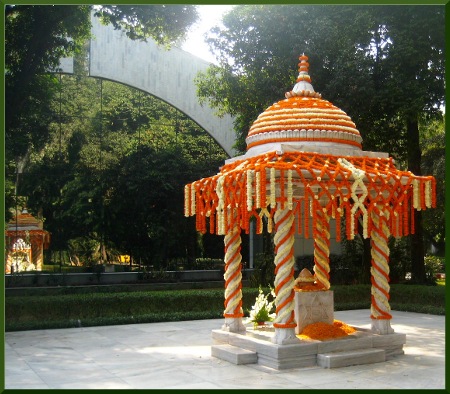 Departments and the Activities of Aurobindo Ashram:

It is an allopathic dispensary that serves as the medical need for the people residing within the Ashram. Therapies and other kind of remedies are available in the care centre.

The ashram garden and nursery has beautiful flowers grown and maintained by the people residing here. Further, organic vegetables are also grown here which serves the purpose in the ashram kitchen.

Yoga classes are conducted within the ashram premises three days a week, three times a day.

From June to August, every year a huge number of fruits are grown which are then made into jams and juices.

This part of the ashram is a very useful unit for it utilises waste paper and natural substances and produces high quality paper in large quantities.

The Ashram takes the pride in grinding its own flour and spice. The mill is well maintained and the products are also of very good quality.

This Hall remains open on all days for meditation. Collective Satsang, Devotional Music and Readings take place daily from 7.00 PM to 7.30 PM.

Tapasya is a residential building meant for devotees and seekers who come to the ashram.

The Library remains open on all days except Mondays. The library has a huge collection of great books and periodicals.

The ashram even has a workshop complex in which various activities are carried out such as works on wood, photo lamination and also care of hardware materials.

Lecture Series are held during the birth anniversary celebrations of Sri Aurobindo and Study camps and retreats are organized during summer and autumn periods.

This agency deals in all kind of products of Pondicherry and Delhi ashrams. Products include sale of second hand goods, cassettes/VCDs/DVDs, incense, hand made paper stationery, etc.

Two journals are released quarterly in Hindi and English which are Sri Arvind Karmadhara and The Call Beyond respectively.

Explore more about Society in Delhi